We didn't see the bounce in AAPL that I was wondering about in my post on January 5th. Momentum continued to the downside and price has pushed down to around 440 as I write this article around mid-day on Friday.

AAPL is still underperforming the NDX, as shown on the Weekly ratio chart below. 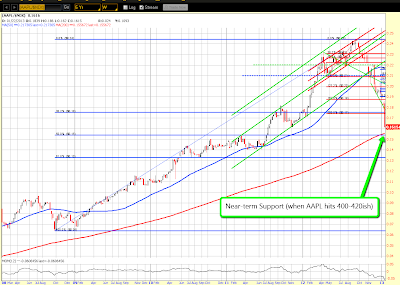 Price is approaching a 50% Fibonacci fanline at around the 420ish level, as shown on the Weekly AAPL chart below.

Major support lies somewhere around the 420-400ish level. It will be interesting to see if price begins to level out there, especially as it has now broken below its large uptrending channel from the 2009 lows.

Apple Inc. has also lost its place as the most valuable company in the world to Exxon Mobil. 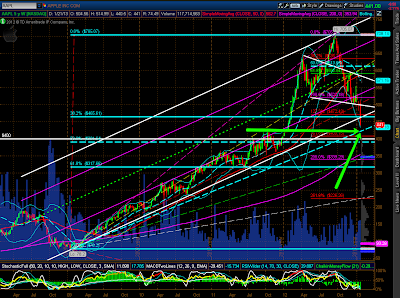 In a recent post ("Two Ways of Hedging Apple and Research In Motion"), we mentioned that Tim's bearish November post about Apple ("How Apple Became Japan") looked prescient. It looks even more prescient now after Apple's post-earnings tumble. In our post, we mentioned a few different hedges on Apple. Below is a quick update of how those hedges reacted as Apple dropped more than 12% on Thursday.

END_OF_DOCUMENT_TOKEN_TO_BE_REPLACED

My new web site SocialTrade just had a couple of nice new improvements I wanted to let you know about. First, on the home page, you can now add a comment for any particular item just by clicking on the comment button. You don't have to "drill down" to the item anymore.

Second – and I really want to encourage folks to use this one! – you can rate an item (anywhere from 1 star, worst, to 5 stars, best) directly from the home page. Just one click, and bang, your judgment is there for all the world to see!

Since down-markets appear to have been outlawed, I am forced to share charts that strike even me as having excellent potential for more upside. I offer these without further commentary, but plenty of grimacing: