Shares of Affymax, Inc. (AFFY) plummeted 64% on Tuesday after the company announced late Monday that it was letting go 75% of its workforce. AFFY is now down 70% since March 7th, but an AFFY long who opened this optimal collar hedge then would only be down 12% over the same time frame. For an investor who owned 1,000 shares of AFFY, opening that collar would have cost $50, and it would have saved him $2,470 in downside on his shares. In this post, I’ll show how that hedge worked.

Hedging AFFY After Its Dead-Cat Bounce Two Weeks Ago

News of a drug recall last month caused AFFY shares to plummet from a price of over $16 to under $2.50 in late February, but the stock had what now appears to be a dead cat bounce on March 7th, rising 54% to close at $3.52. At the time, we noted on StockTwits that, despite the stock’s jump, it was still too expensive to hedge against a >20% drop with optimal puts*. As the screen capture below shows, the cost of that level of put protection on AFFY on March 7th was greater than that 20% decline threshold.

Too Expensive To Hedge With Optimal Puts 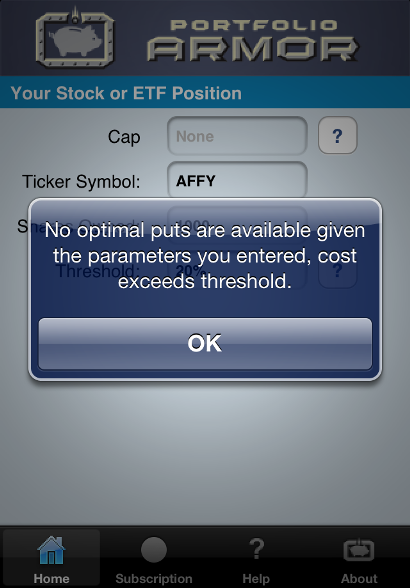 Not Too Expensive To Hedge With An Optimal Collar

In a subsequent message on March 7th, we mentioned AFFY wasn’t too expensive to hedge against the same >20% with an optimal collar**, if an investor was willing to cap his upside by the same percentage over the same time frame. The screen capture below shows the optimal collar, as of March 7th, to hedge 1000 shares of AFFY against a greater-than-20% drop over the next several months.

That Collar’s Puts On March 19th 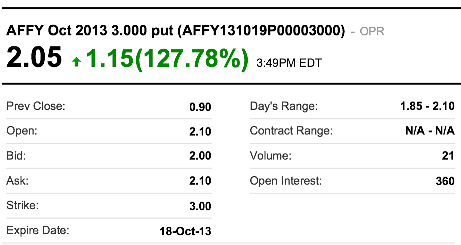 Recall that the optimal collar above was designed to protect against a greater-than-20% decline. Because the puts in this collar had plenty of time value in addition to intrinsic value as of March 19th’s close, they offered more protection than that.

**Optimal collars are the ones that will give you the level of protection you want at the lowest net cost, while not limiting your potential upside by more than you specify. The algorithm to scan for optimal collars was developed in conjunction with a post-doctoral fellow in the financial engineering department at Princeton University. The first two screen captures above come from the Portfolio Armor iOS app.