The decision on Cyprus has been delayed until Monday and may be delayed further. The principle that depositors’ money has to be appropriated seems to be off the table and Cyprus is looking hard for a viable alternative. Cyprus may well not be a market mover over the next few weeks if an alternative solution can be found.

This toxic precedent has been set however even in the failed attempt, and this is likely to have a strong effect over the next couple of years as bank deposits leave the EU for friendlier climes. This also fits in with my view of bonds, where I think a major decline over the next couple of years is just getting started. I’ll be explaining my technical reasons for this view another day, but for now I think an H&S is forming on TLT with the next major downside target in the 106.5 area as the H&S neckline. I have sketched a possible path for this on the TLT chart below: 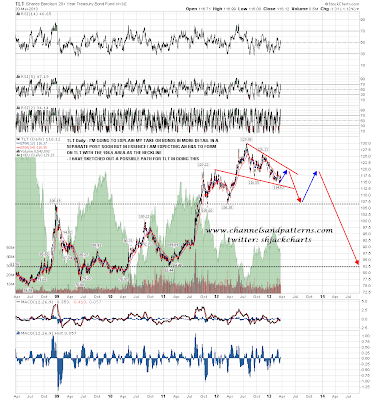 While ES / SPX has been in retracement mode, each significant high or low has been signaled with divergence on the ES 15min RSI. A topping signal was given on this at the high yesterday and I’m watching with great interest to see what happens here. If ES / SPX is still in retracement mode then we should now see a move back into the ES 1530s, with a possible double-top formed that would target the 1505-10 area on a conviction break below 1530. If a new wave up has started then this sell signal will get steamrollered as ES makes a new post 2007 high. If we are in a new wave up then the next big resistance is at the 2007 high in the 1576 SPX area:

There is an obvious candidate double-top setup on NDX that strengthens the bear scenario here, though as always it’s worth noting that 65% of these setups never make it back to the trigger level: 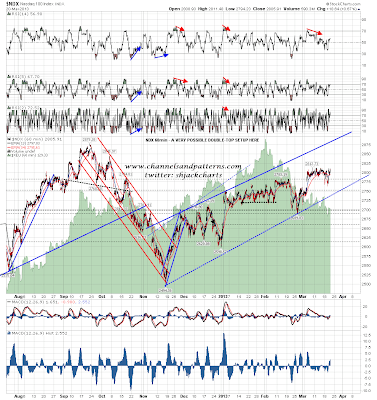 There are a couple of things worth noting here on the SPX weekly chart. I was saying last year at the two major highs then that there could be no normal weekly RSI divergence signal yet that would generally be seen at a bull market high, as the weekly RSI had not reached 70 since the 2011 high. The weekly RSI has now reached and exceeded this level so this signal can now start to form. The high in 2011 rose only another 40 points or so after this level was reached but it’s worth noting that the 2007 high was a further 150 points and a year after the equivalent level. This countdown is beginning, but it might last a while yet:

CL is holding main support at 92.3, and that is cautiously bullish while it lasts:

EURUSD is fighting to hold the 1.288 support level. If it can hold it there is a decent chance of a multi-week EURUSD rally here:

Now that AAPL has broken up from the falling wedge I am running three higher probability scenarios here, two bullish and one bearish. All expect AAPL to test the 485 level and I have detailed these on the chart: 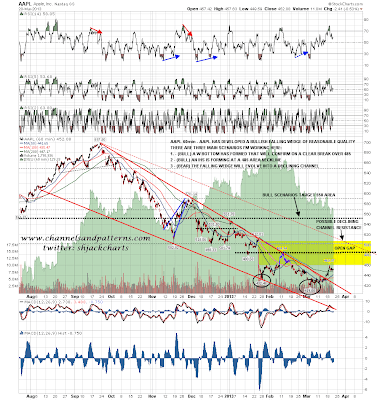 The ES 50 hour moving average is in the 1546 area and held as support overnight. The 100 HMA is in the same area. That is main support this morning and if the bears are to have a shot here they will need to break and hold below it.