Further to my last Weekly Market Update, this week’s update will look at charts and percentage gained/lost graphs of the four Major Indices for the past week, month, and quarter (my Q1 2013 market wrap-up can be seen here).

This past week was, basically, a week of indecision, consolidation, and range-trading…following their choppy decline which began in May. The week ended a bit higher than the prior week’s close. The Russell 2000 Index made the most gains. 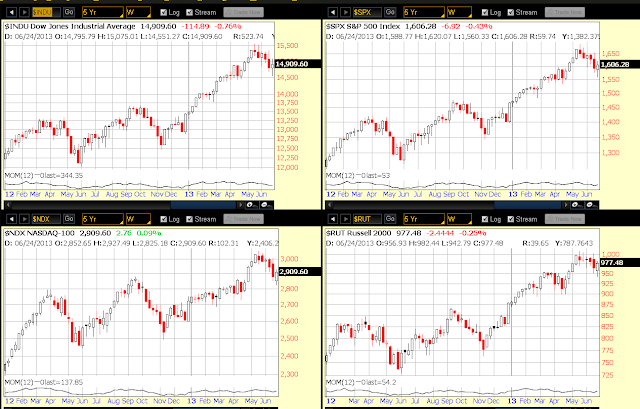 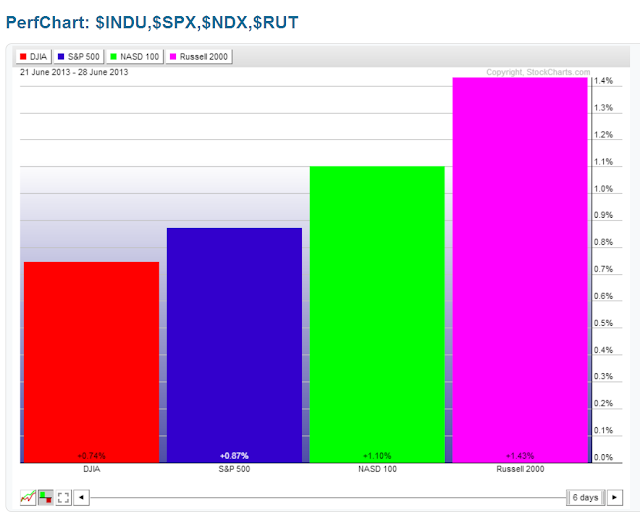 This past month was, also, a month of indecision, consolidation, and range-trading…following their rise from January of this year. The month ended a bit lower than the prior month’s close. The Nasdaq 100 lost the most in June. 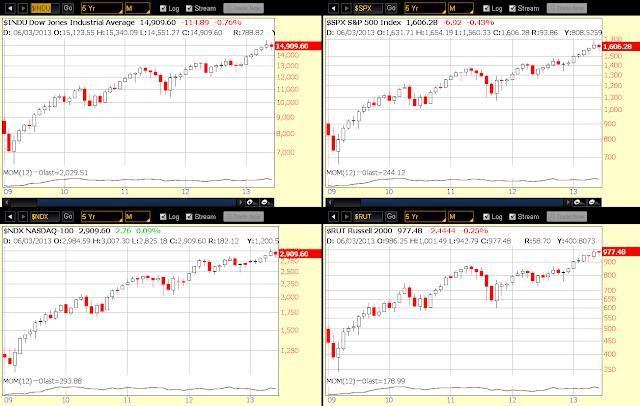 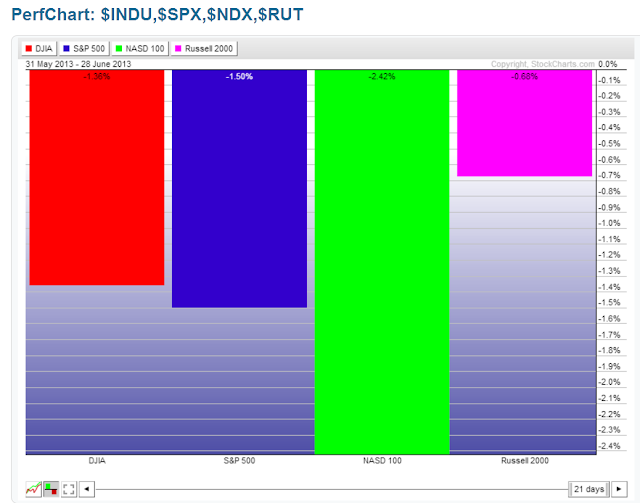 These indices made minor gains in Q2 and did not end at their highs…as reflected in the other timeframes noted above. The Nasdaq 100 made the most gains for Q2. I’d have to characterize Q2 market action as “unremarkable” and “testing the waters above 2008 highs.” 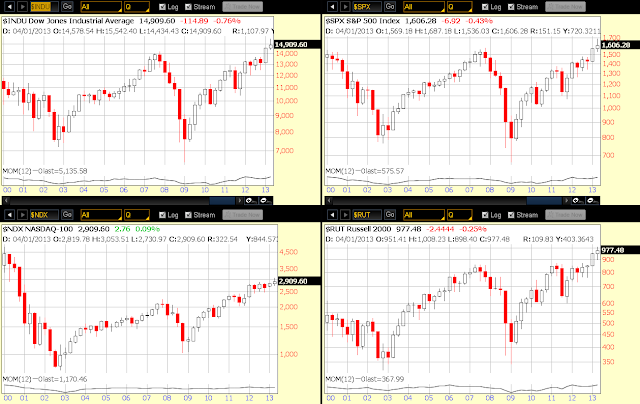 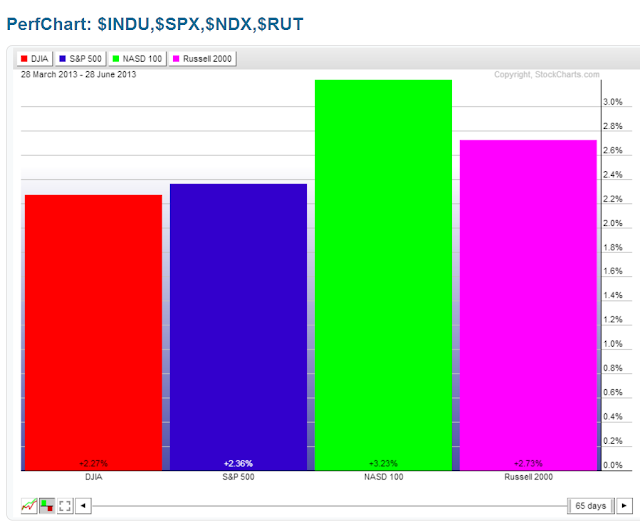 I’ve added an extra graph to show percentage-gained leadership for the entire year to date. The Russell 2000 has made the most (net) gains, while the Nasdaq 100 lags. 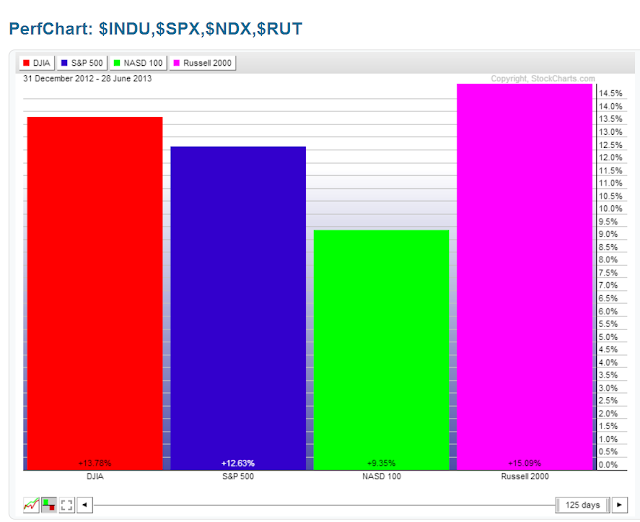 Included in this review is the following Daily chartgrid of the four corresponding E-mini Futures Indices…you’ll see the Nikkei E-mini Futures Index on there, as well. I’ve added a channel to show price action within it from the November 2012 lows.

You can see how important it will be for the bulls to hold price above the latest swing low, as I’ll explain below. 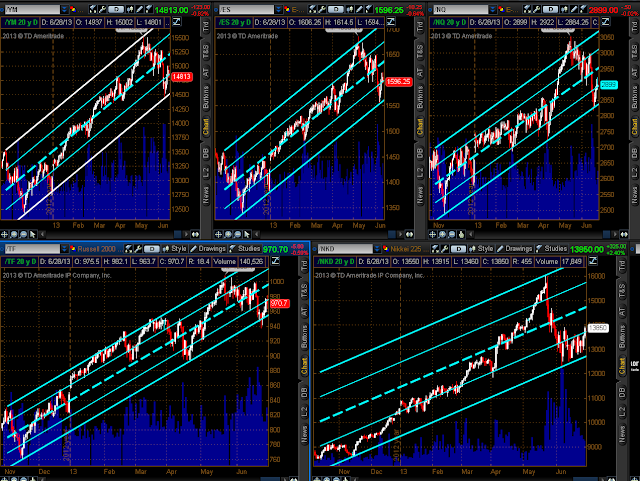 For example, if I assumed that the ES would advance within this channel at approximately the same pace and price range for Q3 & 4 as it did for Q1 & 2, the ES could (hypothetically) close out the end of this year at 1900ish.

Perhaps a clue may lie in the Nasdaq’s ability to regain a leadership role for the last half of the year, as well as the ability of the Nikkei to regain a bullish foothold after its parabolic climb and plunge earlier this year. Volumes have become very frothy since May in all five E-minis…should they stay elevated, we may see more wild, volatile and large overnight and intraday swings and chop until a new uptrend is established on the Daily timeframe. 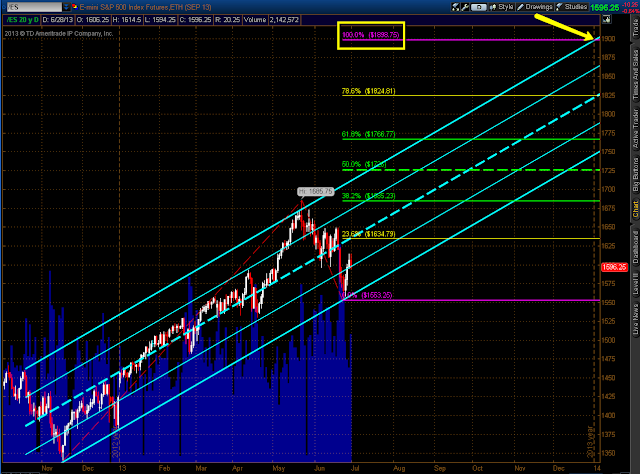 There are a couple of noteworthy holidays next week. The Canadian markets will be closed on Monday July 1st in observance of Canada Day. The US markets will close at 1:00pm EDT on Wednesday July 3rd and all day on Thursday July 4th for Independence Day. As a result, Daily market trend may not become clear until the following week, and we may see more choppy range trading within the lower half of the channels.

Have a great weekend and good luck next week. 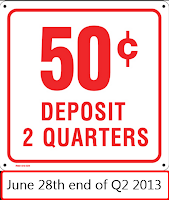