After I sold Prophet in 2005, I made a number of investments, both public and private. One of the more interesting ones is Kareo, which is a web-based medical billing system. As a company, it's really starting to pick up steam, and if any of you are in the medical profession (or know someone who is), you should really check it out. I wish they were public so I could get away with discussing their chart, but as it is, I'll just shamelessly submit this plug. Now we return to our regularly scheduled Slope of Hope…

SPX broke the long chain of negative Mondays yesterday to close up, and has moved up further overnight. I don't have a huge amount of confidence in this move up given the situation on USD and commodities but it might yet run quite a bit further, and I wouldn't be that surprised to see a weak new high made on SPX soon. Short term ES has broken a second level of declining resistance overnight and is testing resistance at the hourly 200 SMA. If it can break up through that then the next trendline target is in the 1355 area:

You sometimes see a second line of declining resistance established after the first line of declining resistance is broken and I was interested to see that happen on ES yesterday with the Friday high acting as the new trendline's second touch. That works the other way as well of course and there's a nice example of this on the Russell 2000 where, alone of the major indices, it bounced at an obvious support trendline. RUT looks fairly bullish here and I wouldn't be surprised to see a new high in the early 870s if equities break up strongly: 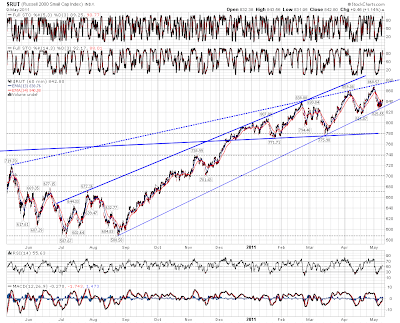 EURUSD never made my channel target, but there's every reason to think that it has put in a significant interim top. It touched the first obvious level of major support at 1.425 yesterday, at support from the November and March highs, and it may well bounce here. There is an obvious target slightly further down at 1.416 to finish the head on a potential HS pattern and it's possible it might drop a little further to hit that before bouncing:

Oil's looking very interesting here as, subject to geopolitical disturbances, a very nice short setup is developing and this current bounce has a clear target. After my double-top call at 113.5 resistance two weeks ago oil then hit my 96 target and overshot it slightly. The hourly candle closed at 96 though, and the potential H&S I was thinking might form at the 96 neckline is now forming. The left shoulder topped slightly over 106 and I'm not expecting a move much higher for the right shoulder. The H&S target is in the 80 area, though I'd expect it to fall somewhat short of that target for the next bounce under 96, as I'll illustrate on the daily chart after this 60min chart:

On the oil daily chart rising support is in the 86 area. However there's a double-target slightly below that looks interesting, and that's in the 83.6 area, which would be both a currently theoretical channel support target and the H&S neckline for a much larger H&S that could be forming and might play out if we are to see a really big reversal on commodities in the next few months. If oil were to make that 83.6 target that would be a major support hit and regardless of any possible H&S forming there, that might well be as low as oil goes:

The obvious support targets on SPX, Dow, Transports and others weren't hit on this last move down, and as a result I'm less confident in this bounce than I would be otherwise. There are good reasons to think that this bounce will be short-lived, and I'm neutral on direction today. On ES I'm seeing decent resistance at 1355 if it can break up through 1350, and there's decent support at 1342 today. A break below 1338 would signal a move back into the 1320s.