This is one of those irritating mornings when the markets move rapidly while I'm preparing my post. We had a nice looking bull setup on ES earlier when I capped the chart below, with positive divergence on the 60min RSI and a nice test of triangle support. Since then ES has moved lower to test 1220, the triangle is breaking downwards, and any positive divergence on the 60min RSI is now very muted. We need to see how this opens today but right now this is looking bearish: 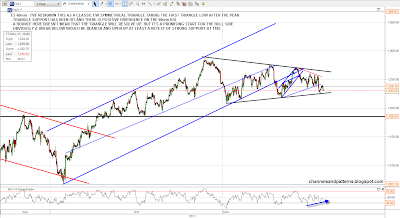 TF has been outperforming ES in recent days and is not yet close to triangle support. I'd be inclined to give any move on the ES triangle more weight however: 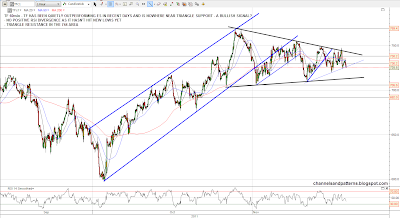 NQ is still within the 2280 – 2400 consolidation range at the moment, but is getting close to the lower boundary. A break below 2280 with any conviction would look very bearish: 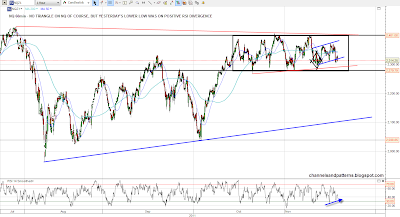 I mentioned yesterday that there were signs that EURUSD and GBPUSD might be trying to make a short term low. Those signs are stronger this morning and there are no new lows in sympathy with ES so far this morning. Obviously unless we see these break up then they might just be forming bear flags, but both are showing signs of bullish reversal here. So far on EURUSD we have a marginal new low on positive RSI divergence and a potential double or W bottom. A break above 1.356 would look very bullish, a new low with conviction would negate this setup: 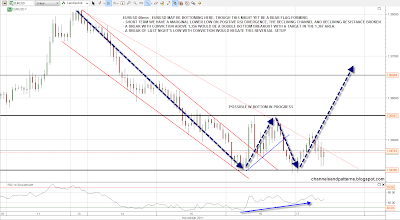 GBPUSD looks weaker but again we see broken resistance trendlines, new lows on positive RSI divergence, GBP might well reverse here and as I mentioned yesterday a reversal on USD here would look bullish for equities: 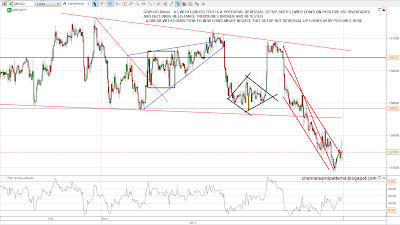 This is a VERY important inflection point for a number of reasons. Two charts that show why are the Vix and ZB charts, where on ZB (30yr Treasury futures) the top of the recent range is being tested at the moment. This range may well be a bullish rectangle and on a break above would target the 146'10 area, close to the 2011 high at 146'13. To get back to that level on ZB would suggest a big move down on equities, and if ZB were to break that high with any conviction then a break of the 2011 lows on equities probably wouldn't be far behind: 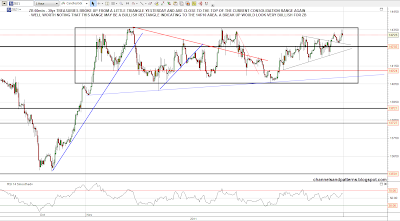 The potential IHS on Vix is also still in play, though the right shoulder is now looking somewhat extended. Again this might yet start to look very ugly for the bull side: 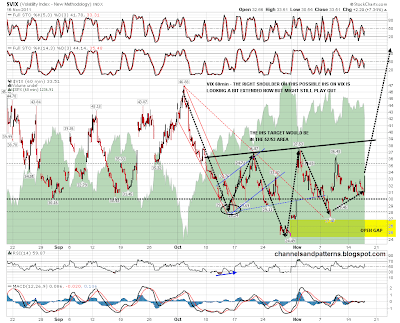 Copper hasn't done much lately and that's interesting for a couple of reasons. Firstly copper hasn't confirmed the bullish move up on equities since the October low, which looks bearish. More immediately though, copper has been sliding down a declining resistance trendline, and a break above would look short term bullish. On a break down here the October low at 300 isn't far below, and a new low for 2011 on copper with any conviction would be a very bearish signal: 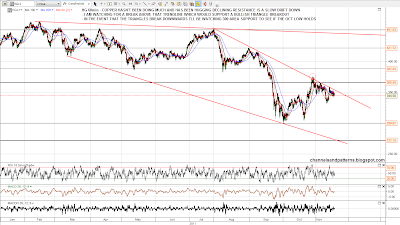 Last chart of the day is the silver futures chart (SI). Rising support from the low broke yesterday and at the time I capped this chart the very important support level at 33.6 was being tested. On a break down I'm looking at a retracement to the potential H&S neckline support level at 32 and while I've been writing silver has broke down from 33.6 to test 33. Expecting more downside on both silver and gold: 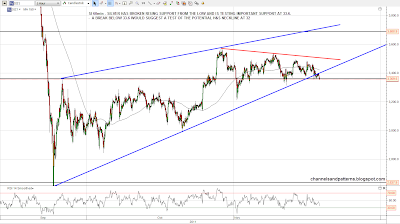 The break below triangle support on ES looks bearish but this might still break the other way. I'm watching the opens for the triangles on SPY and WLSH (very broad index) to see whether they break down. I'm also watching EURUSD and ZB to see whether either breaks up from the current consolidation areas. Advantage to the bears on the premarket so far.