This year will be the 8th year I’ve been writing this blog. I never imagined when I started writing what would become Slope of Hope in 2005 that I would have this many readers and that the blog would be such a big part of my life, but I have been feeling the urge to tell people just who you are dealing with, since this blog is still very much a personal expression.

You are going to find a lot of dichotomy and contradiction in this post, because that’s what I’m like. I spend half my days wishing someone would sneak up behind me and shoot me in the head, and the other half of my days feeling just OK. I'm never really happy – – – it’s been years since I’ve been anything close to that – – – but at part of my life I can spend not wishing to be wiped away.

The darkness of my mindset is pervasive; I have written countless private notes to myself to try to sort out my feelings; one snippet reads like this:

• No good deed goes unpunished. So hang on to everything you’ve got. Giving always backfires.

• Most of “success” is dumb luck – being in the right place at the right time. Lots of good, smart people don’t get shit, and lots of mindless, stupid people make fortunes.

• The way you live and what you get aren’t correlated. Evil, obnoxious people can get all they want, and decent, hard-working people can live with deprivation.

• The human desire to consume useless shit is almost insatiable, since most people are devoid of any real soul or understanding.

I sound like a barrel of laughs, don’t I? But I have to be honest with you. I can feel very bitter at times, and if nothing else, I owe my readers some honesty.

END_OF_DOCUMENT_TOKEN_TO_BE_REPLACED

Here's a look at how some markets closed out 2011…actually, I'm a bit surprised that the U.S. Equity Market Indices aren't down more, considering the above turmoil…perhaps they've been artificially elevated…

The Dow Utilities Index was the big gainer among the Dow 30, Dow Transports, S&P 500, Nasdaq 100, and Russell 2000 Indices, as shown on the Year-to-date graph below (courtesy of www.Stockcharts.com). 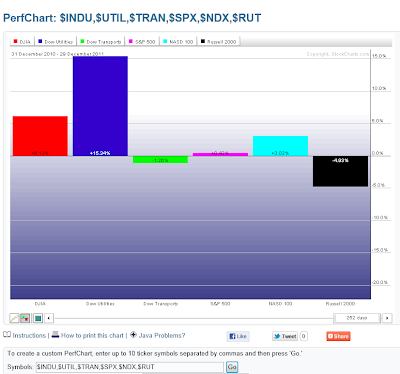 The second Year-to-date graph below shows that these Major Indices are all at some form of trendline resistance. 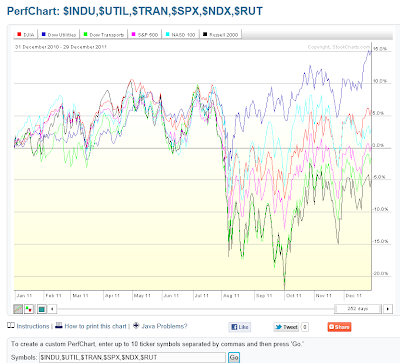 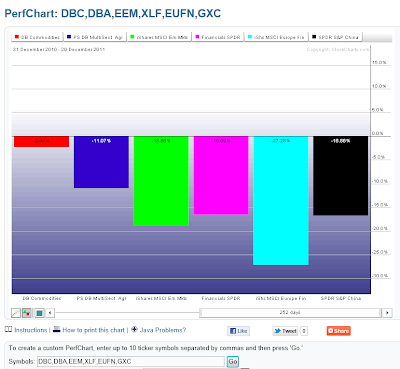 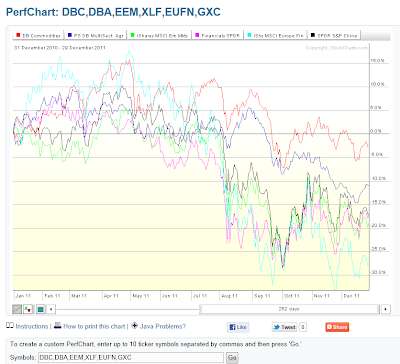 The U.S. $ was the biggest gainer among the Euro (the biggest loser), the Canadian $, the Aussie $, and the British Pound, as shown on the Year-to-date graph below. 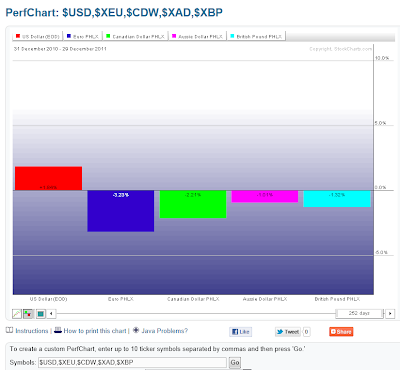 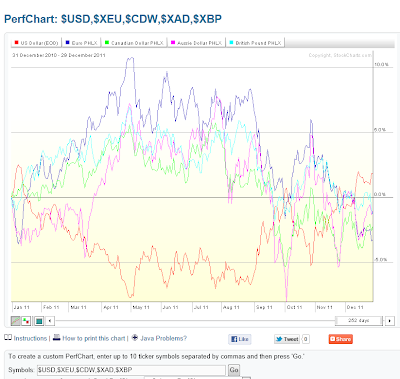 Oil and Gold were the biggest gainers compared to Copper, as shown on the Year-to-date graph below. 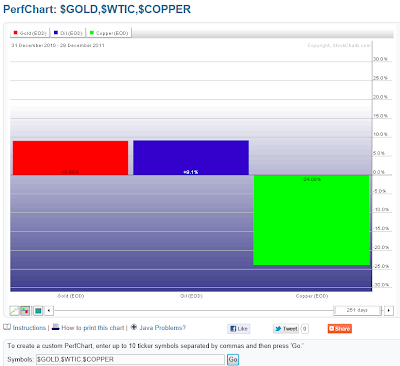 The second Year-to-date graph below shows that Oil is at resistance, while Gold is just above support, and Copper is in between triangle support and resistance. 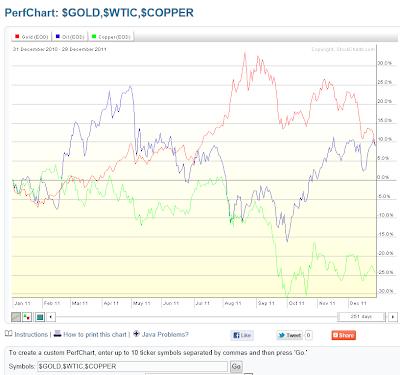 The VIX ended up nearly 32%, as shown on the Year-to-date graph below. 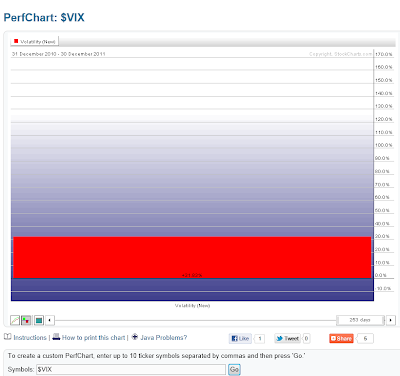 The second graph shows that the VIX ended just above major support and just below near-term resistance. It ended the year up, compared with a neutral ending for equities…an interesting correlation…and one to watch…not all may be as stable as may appear from the Equity Indices…particularly in view of the 170% increase in volatility that we saw in August. 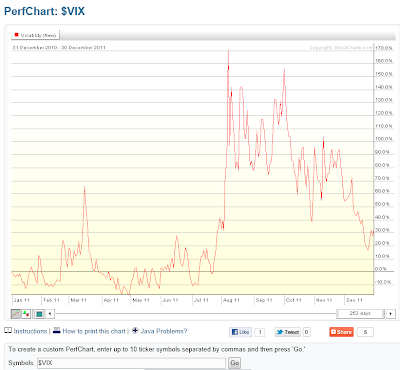 The biggest gainers of the year, overall, were Dow Utilities, Oil, Gold, and the U.S. $, with U.S. Equities ending generally neutral, the Euro the biggest currency loser, Emerging Markets a big loser at nearly 19%, Copper a big loser at 24%, and Financial markets (U.S. and Chinese), especially the European (at 27%), the biggest losers.

The question will be whether stability returns to the European markets and whether recent stability can hold and improve in Emerging Markets for 2012, or whether volatility (VIX) will rise again…the VIX is still elevated, so there is a good possibility that it will. No doubt, all market action will be reflective of upcoming world news events, as well as consumer and investor sentiment, together with risk vs safety appetite. A couple of gauges that I'll follow in this regard are the VIX, U.S. $, and Copper, as well as the other instruments noted above. Without benefit of major Fed QE intervention, I imagine that next year could be range-bound…within this year's high and low, generally…although unforeseen catastrophes could send the Major Indices below this year's lows. As I noted in my post of September 30th, 2011, major support levels for the Major Indices are: http://strawberryblondesmarketsummary.blogspot.com/2011/09/who-won-pinball-game-in-3rd-quarter-of.html

I hope that 2012 blossoms into much peace, prosperity and happiness for each of you! Thanks to all who have shared their insight and from whom I've learned a great deal. A huge thanks to my trading friends for your kind support this year…you helped me keep my sanity…Smudge is very grateful for that! 🙂 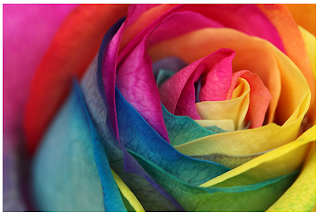 END_OF_DOCUMENT_TOKEN_TO_BE_REPLACED

Over the last year many things have come to pass. Some of you have had a fantastic year with marvelous opportunities, others may have hit walls that seemed thicker than most fortresses. Some experienced additions to their families, others have lost some. Regardless of where you find yourself one must always remember it’s called life. People, places, money, opportunities, careers, and more come and go like the tide washes in upon the shores. Nothing is written in stone, nothing is guaranteed. No matter what lies behind us or before us, the only thing we ourselves have complete control of is our own minds. It will be how each of us deals with whatever life throws at us good or ill. No one but ourselves is responsible for how one deals with life. It’s your decision to make every stride in the coming days to be your best, and it is also your decision to leave it up to the winds that blow if you decide not to make any decisions at all, but then again that is a decision is it not?