Last night I got a very nice email, which read:

Let me start by saying I love your blog. Since finding it several months ago, I've learned a great deal about trading from you and a handful of others. My profits from (mostly swing) trading have since surged.

Reading your thoughts about eclectica have also proven most profitable (in a less material–but no less satisfying–way). Again, thanks.

The reason I write to you is my desire to give back. I get a lot from SOH but I give very little in return and this troubles me. I realize the site makes money from ad clicks, but I've installed Adblock Plus on my PC and thus, cannot see the various ad banners on your site….I'd like to ask to contribute to you via PayPal each month to compensate my lack of ad clicking. Quote me a figure and I'll be happy to send you the sum.

Now, in seven years of doing this blog, and countless tens of thousands of readers, no one has ever made me such a direct offer (although I've received a box of chocolate or two and some nice wine in the past from a few readers). I wrote the gentleman back:

I've actually toyed with the idea of accepting donations, but I've elected not to do so. I've read from other bloggers that it changes the "relationship" between the writer and the reader, and that makes a certain amount of sense to me. Also, I'm a little gun-shy about even one penny actually changing hands. In seven years of blogging, I haven't received a cent of currency from anyone.

I actually think you're the first person who's actually asked how they can send me money, so consider yourself remarkably generous  I must politely decline.

And then, a few moments after sending my email, I realized I was being an idiot, so I followed up:

So as not to waste your generous urges, feel free to get your Karma Points for your benefit from Slope by donating to a favorite charity of mine

I tend to like dogs more than people, so I always send readers this link.

I wasn't sure if he'd donate anything, but I was hoping he'd send ten bucks their way or something.

And, so, this morning, I receive….

Based on your selfless recommendation, I made a small donation to BFAS in your honor. You're on the right path, Tim.

I asked the writer his permission to anonymously recapture our conversation, and he agreed. I wanted to relate this story not just because it makes me feel good, but because it shows the kindness that some people can exhibit. Particularly Slopers. (Can you imagine someone from IBC doing anything like this? No, you can't. Because we're better than them).

If you want to help out as well – even if it is the ten bucks I was originally expecting! – here's that link again (although, looking at the form, I notice the reader actually had to hand-enter his amount, since the highest amount suggested is $500!) And if not….you could always throw me a click or two.

Most of what Jim Cramer has to say nowadays becomes fodder for ridicule in my newsletter.  The truth, however, is that before he became a media maniac he was a tremendously successful trader.  So hidden in his gobs of nonsense are occassional gems.  Years ago I heard him talk about the note-to-self he kept posted on his monitor that read "discipline > conviction."  Clearly the guy was aware of his own ego and it's ability to sabotage his performance.  At the moment he felt himself extending his middle finger to the screen and loading an order to double-down, there that note would be staring back at him.  A simple, though I suspect powerful, manual override.

END_OF_DOCUMENT_TOKEN_TO_BE_REPLACED

May the Bear Gods forgive me for my sin.

The stocks below are showing signs of, or already in the process of, breaking down as the smart money appears to be leaving them in a subtle manner. There are stocks trading at its peak and finally showing some vulnerability, while on the other extreme, there are stocks that have been in a channel near or at their lows, before finally breaking down below those lows.

Of those listed below, I'd pay close attention to Silicon Image (SIMG) which is sporting a nice rounded top and the inability to break through the 200-day MA.

Authentec (AUTH) has a nice long-term double-top and is dropping rapidly. Wait for a bounce before going short on this one.

END_OF_DOCUMENT_TOKEN_TO_BE_REPLACED 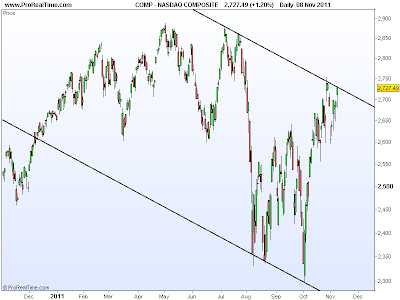