The bulls failed to hold the 1320-2 area yesterday morning and I posted the SPX 60min chart on twitter in the afternoon pointing out that unless we were to see a more decisive break up, then what we are looking at on SPX is a bear flag with a downside target in the 1210-20 area: 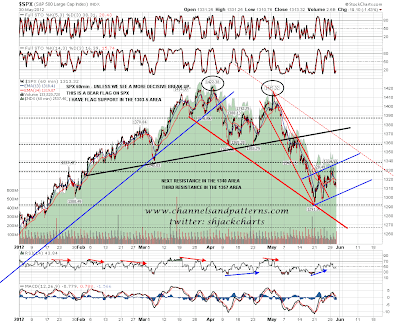 ES bounced at rising / bear flag support there overnight so there's little to contradict that assessment this morning:

Bear flags don't always break down of course, but they generally do, and there's little reason to think that this one won't at the moment. I would still like to see another move up to hit the middle bollinger band, now in the 1339.50 area, but we may not get that. If we do it will look like a short entry level: 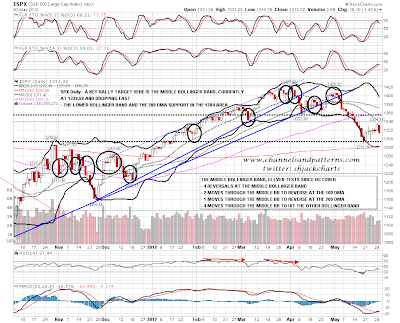 I posted the RUT chart the other day giving the obvious rally target as the retest of the H&S neckline there. Unlike the SPX H&S the RUT H&S has not yet made target of course. RUT has double-topped at the neckline retest so far, and the obvious next target is now a move towards the H&S target in the 720 area: 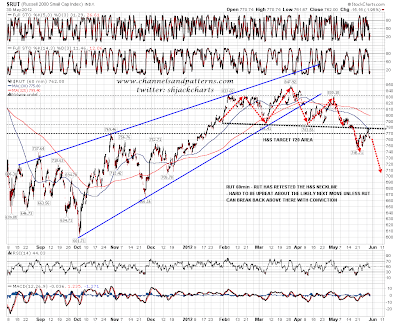 Is there anything that looks encouraging for the bulls this morning? Not much, though AAPL is trying to break up. So far however that rally has only reached the theoretical declining channel resistance trendline I've been marking on that chart. That's not particularly bullish yet for obvious reasons, but any higher would look more encouraging. Given the overall chart setup on equities though I'm doubtful about AAPL reaching the IHS target at 625: 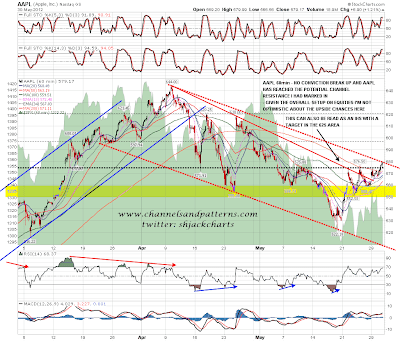 I posted the chart showing TLT testing five year channel resistance last week and earlier this week. We are seeing a break over that at the moment, though we need to close a week above to kill that as resistance. If we see that I'll repost my charts for where I think bonds would most likely be heading on a major breakout: 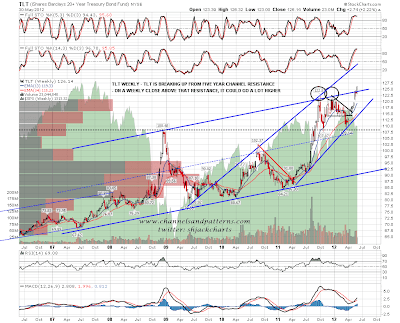 I mentioned yesterday morning that the next significant resistance was at 83.50. I have a static resistance level and a rising resistance trendline in the 83.5 to 83.75 area and that would be my top pick for a reversal area if we are to see USD retest the IHS neckline. We may well reach that resistance area this week: 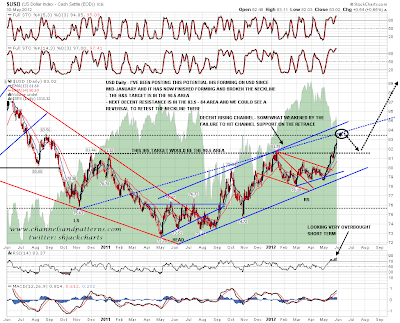 On my bigger picture 32 year USD monthly chart declining resistance from the 1985 high is in the 92.5 area, and that would be the target I am mainly looking for rather than the IHS target at 90.5. That test would be very important, as there is also a possible double-bottom on the chart that triggers a target of 105 on a break over 89, with the only really strong resistance above at 92.5. Worth mentioning that again here as we may be making that test in a few months: 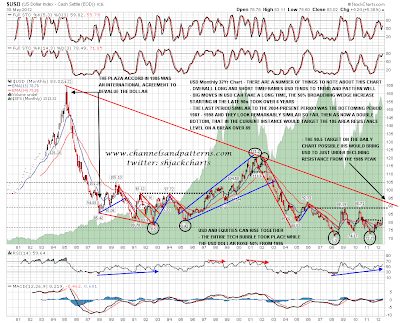 I have SPX bear flag support in the 1303-5 area. I would like to see a test of 1340, and that's possible, but that becomes less likely on a break below flag support. If we do see a break below I will be considering two main options. The first will be a potential double-bottom that holds above the SPX 200 DMA in the 1283.50 area on a closing basis. On a break below there I would be looking for a move well below 1250 that would most likely see most or all of my large and very bearish patterns across various indices finish forming and test their pattern support necklines. We'd then see what happens then, but obviously that could get very ugly.