A reader recently emailed me, asking how he could hedge a "typical $500k
mutual fund portfolio". I'm going to walk through a step-by-step
example of doing that in this post.

If you own a portfolio of
stocks or stock funds, you can hedge that portfolio against market risk
by buying optimal puts* on a suitable exchange-traded fund, or ETF. The
first consideration is that the ETF will need to have options traded on
it, but most of the most widely-traded ETFs do. The second
consideration is that the ETF be invested in same asset class as your
portfolio. Let's assume your portfolio consists primarily of blue chip
U.S. stocks. An ETF you could use as a proxy would be the SPDR Dow Jones
Industrial Average (DIA), which, as its name suggests, tracks the Dow
Jones Industrial Average. You could then enter its ticker symbol, DIA,
in "Ticker Symbol" field in the Portfolio Armor app, as in the screen
capture below. 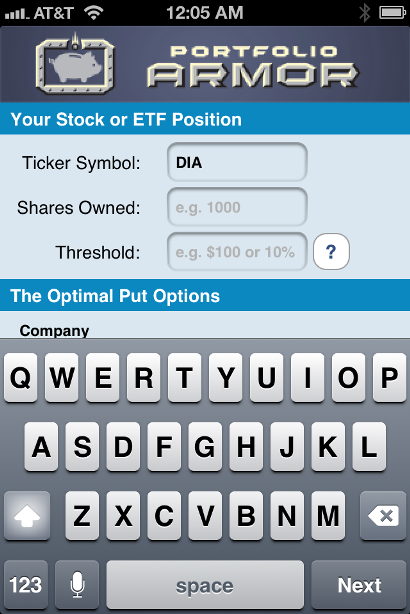 Step 2: Pick A Number Of Shares

In order to hedge a $500k
equity portfolio against market risk, you would want to hedge an
equivalent dollar amount of your proxy ETF. Since DIA traded at $138.76
on Wednesday, you would simply divide your portfolio dollar amount,
$500,000, by $139.76, and enter the quotient, 3603, in the "Shares
Owned" field, as in the screen capture below. 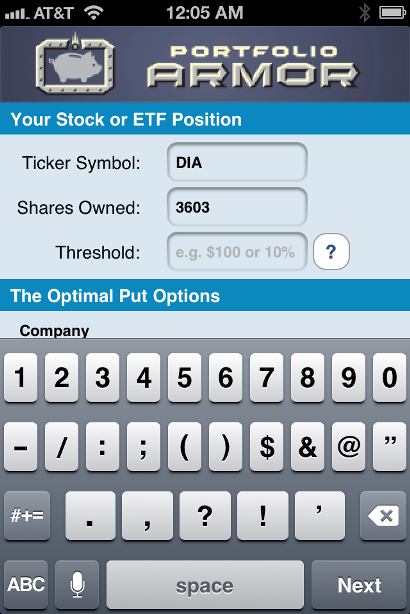 "Threshold", in this
context, means the maximum decline in the value of your position that
you are willing to risk. If you weren't sure of that, you could click on
the question mark to the right of the Threshold field above, and you'd
see this explanation in the screen capture below. 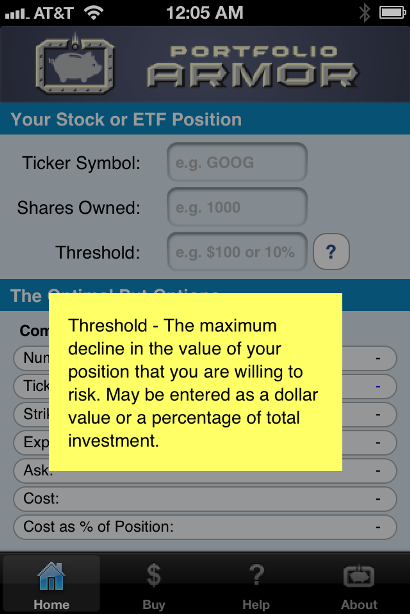 What is the maximum
decline you are willing to risk? Generally, the larger the decline
threshold, the less expensive the hedge, and vice-versa. In some cases, a
threshold that's too small can be so expensive to hedge that the cost
of doing so is greater than the loss you are trying to hedge. In a
market comment in 2008, fund manager John Hussman offered a reason for
considering a 20% threshold:

An intolerable loss,
in my view, is one that requires a heroic recovery simply to break even …
a short-term loss of 20%, particularly after the market has become
severely depressed, should not be at all intolerable to long-term
investors because such losses are generally reversed in the first few
months of an advance (or even a powerful bear market rally).

Essentially, 20% is a
large enough threshold that it reduces the cost of hedging but not so
large that it precludes a recovery. So, for this example, we'll enter
20, in the Threshold field below, and tap "done", as in the screen
capture below. 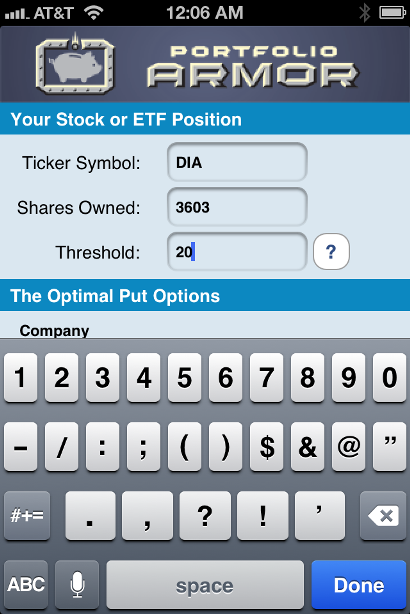 A moment after tapping
"Done", we are presented with the optimal puts. The screen capture below
shows the optimal puts, as of Wednesday's close to hedge against a
greater-than-20% drop in DIA. 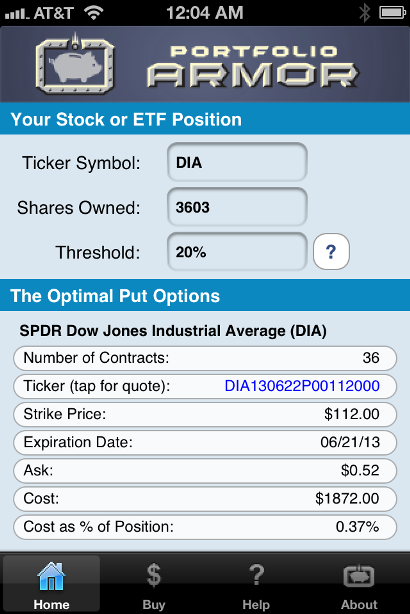 As you can see at the bottom of the screen capture above, the cost of this protection was only 0.37% of your position value.

How This Hedge Would Protect Your Portfolio Against Market Risk

Remember, the reason we
picked DIA in this case is because our hypothetical investor's portfolio
consisted of blue chip US stocks. If those stocks drop in value due to a
market decline, most likely, the Dow Jones Industrial Average will have
dropped as well. And if the Dow has dropped, the ETF tracking it, DIA,
will have dropped as well. If the Dow drops more than 20% — if it drops
20.5%, 30%, 40%, or even more before June 21st — the put options above
will rise in price by at least enough so that the total value of a
$500k position in DIA + the puts will have only dropped by 20%, in a
worst-case scenario.

Put option
prices can move in a nonlinear fashion, which enables a small dollar
amount of them to hedge a much larger dollar value position in an
underlying security. Here is an example of that nonlinearity in action:
in June of 2011, I bought the optimal puts to hedge against a
greater-than-20% decline in DIA over the next several months for my
portfolio. Those optimal puts happened to be the $98.75 strike, December
expiration puts (represented by the symbol DIA111217P00098750 in the
screen capture below). On one day early that August, the Dow and DIA
dropped 4.28%. On that day those optimal puts on DIA were up 74.77%. 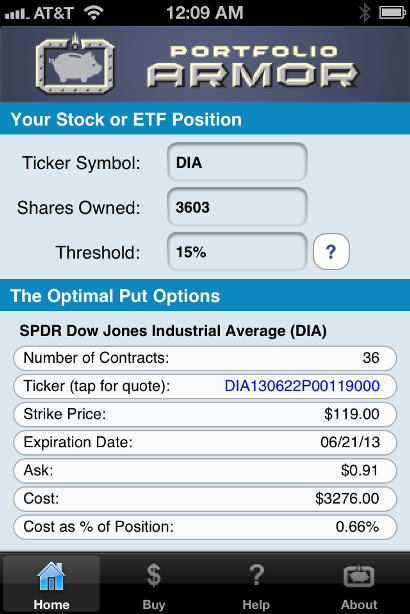 Hedging A Portfolio Of Stocks And Bonds

The example above is
simplified in that we've assumed our hypothetical investor's portfolio
is entirely invested in equities. But what if he had some bonds as well?
In that case, he could use a similar process to hedge his portfolio
against market risk, except instead of using just one proxy ETF, he'd
use one per each asset class. So, for example, if 60% of the investor's
assets were in blue chip US stocks, and 40% in investment grade
corporate bonds, he might scan for optimal puts for a $300k position in
DIA and then scan for optimal puts for a $200k position in the iShares
iBoxx $ Investment Grade Corporate Bond ETF (LOD).

*Optimal puts are the ones that will give you the level of protection you want at the lowest possible cost. Portfolio Armor (also available as an iOS app) uses an algorithm developed by a finance Ph.D to sort through and
analyze all of the available puts for your stocks and ETFs, scanning for
the optimal ones.