The retracement that I was talking about as likely yesterday morning seems to have started now, with ES at 1457.5 as I write. Daily middle bollinger band support on SPX is at 1443 now, but it's worth bearing in mind that the channel support trendline on the current SPX rising channel is currently in the 1415 area. As this retracement develops I'll be looking for a declining resistance trendline to form to help identify when the retracement finishes. Short term there is a double-top target on ES at 1453 and here is the updated rising channel on the SPX 60min chart: 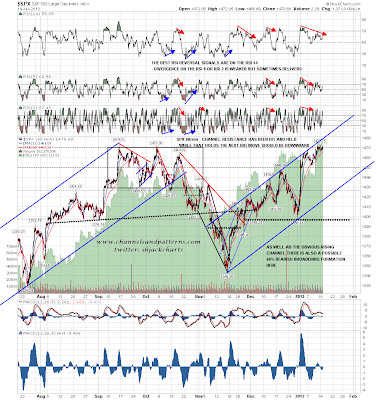 There is a nice looking double-top forming on the NDX chart with a target in the 2660 area on a clear break below 2703.75. That's a decent fit with a touch of rising (possibly wedge) support on the NDX chart: 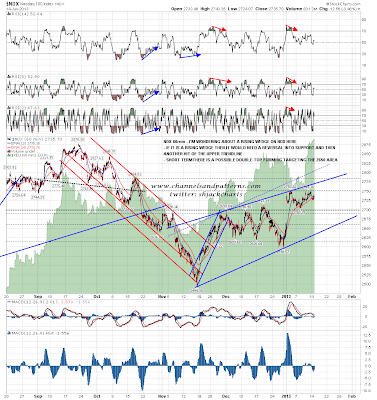 AAPL made new intraday lows yesterday and it looks as though strong support in the 500 area may break. I have two key support trendlines to watch on AAPL. The lower is in the 545 area and a break below that would look very (and surprisingly) weak. The higher support trendline is from early 2009 and is a decent quality trendline with three touches. I have that in the 460-5 area at the moment: 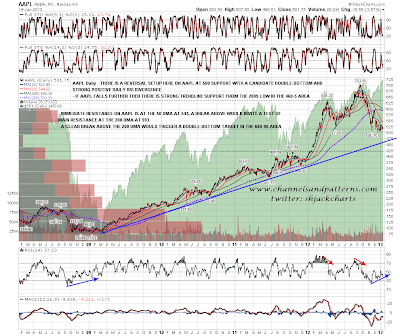 I talk regularly about breaks from rising and falling wedges being followed by the formation of a reversal pattern that then triggers the main break down, and on the daily chart we may well be seeing that on SPX. There is a very good shorter term example of that on the EURUSD chart over the last few days. As I mentioned yesterday morning the last EURUSD move up formed a rising wedge that had broken down. A bearish descending triangle has then formed and that has now also broken down. EURUSD is testing resistance turned support in the 1.33 area, but the triangle target is lower at the 1.325 support area:

CL is consolidating in the 92.65 to 94.8 range. We may see a break below 92.65 but more likely I suspect CL trades sideways in this range until rising support from the low can be tested within it. That's now just under 92:

I'm expecting at least some more downside but the target is unclear. On ES I will be watching the 50 and 100 hourly moving averages (HMAs). In a retracement of any real size the 50 HMA generally moves below the 100 HMA and acts as primary resistance and a subsequent break above the 100 HMA then generally confirms reversal. The 50 HMA is currently at 1465 and if the market is weak today I would expect the 50 and 100 HMAs to cross bearishly in today's session.