A New High For WNR

In the comments of a one of Tim's posts last June ("I Choose the Risk"), Sloper "Bleak" wrote that Western Refining, Inc. (WNR) "might be breaking out of a consolidation range". It looks like Bleak was right, as WNR hit a new 52-week high on Tuesday.

Given that, this may seem like an
odd time to talk about hedging it, but sometimes it pays to hedge a
stock when it's making new highs. Apple, Inc. (AAPL) longs who hedged
when it was hitting highs last year are probably glad now that they did. For
WNR longs who want to stay in the stock, but are considering adding
downside protection, we'll look at two ways to hedge it against
greater-than-20% drops from its current price over the next several
months.

Why Consider Hedging Against A Greater-Than-20% Drop

A
twenty percent decline threshold is worth considering here, because it
lowers the cost of hedging somewhat (all things equal, the larger the
potential loss you are looking to hedge against, the less expensive it
is to hedge), and because a 20% decline doesn't necessarily preclude the possiblity of a recovery. To recover from a 20% loss, an investor would need a
25% rebound in his position. But to recover from, say, a 35% drop, would
require a rebound of more than twice as much, nearly 54%.

The
first way uses optimal puts*; this way has a cost, but allows uncapped
upside. These are the optimal puts, as of Tuesday's close, for an
investor looking to hedge 1,000 shares of WNR against a greater-than-20%
drop between now and June 21st: 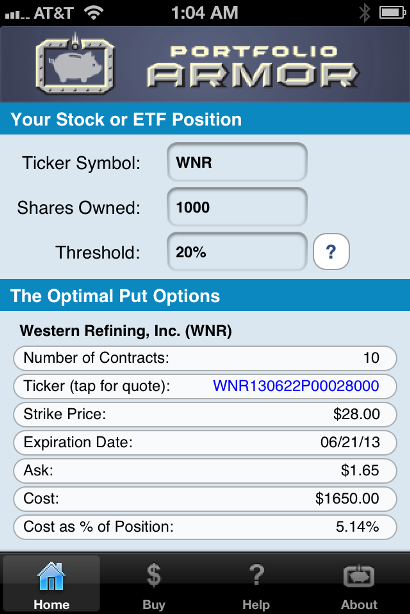 As
you can see in the screen capture above, the cost of those optimal
puts, as a percentage of position, is 5.14%. By way of comparison, recall that the recent cost of hedging the SPDR S&P 500 ETF (SPY) against a smaller (15%) decline was less than 1%.

A
WNR investor interested in hedging against the same, greater-than-20%
decline between now and June 21st, but also willing to cap his potential
upside at 15% over that time frame, could use the optimal collar**
below to hedge instead.

As
you can see at the bottom of the screen capture above, the net cost of
this optimal collar is negative – that means that the WNR investor would
be getting paid to hedge in this case.

**The algorithm to scan for optimal
collars was developed in conjunction with a post-doctoral fellow in the
financial engineering department at Princeton University, and is
currently available on the web version of Portfolio Armor.