There have been three instances since the start of 2013 where on the SPX 15min chart there have been clear lower highs and lows, delivering a clear retracement or consolidation period. The previous two were both short, lasted less than two days before breaking up, and were in effect bull flags. The third retracement started yesterday. Here’s the setup on that chart. I have the obvious initial target for this move in the 1490-4 area, anything lower should deliver a decent retracement lasting considerably longer than the last two: 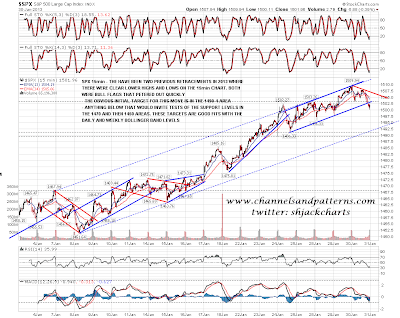 On the SPX 60min chart there is clear negative RSI divergence which was seen only on the first (deeper) January retracement. This is promising and if SPX can get below 1490 then the obvious targets are then the daily middle bollinger band in the 1470-5 area, which fits with a retest of the broken September high at 1474.5, and the weekly middle bollinger band, currently at 1435, and an obvious fit with a test of rising support from the November low, now hitting the 1440 area. This is the retracement I would like to see here, as the establishment of a strong support trendline and this point would add definition to what has so far been a fairly formless melt upwards: 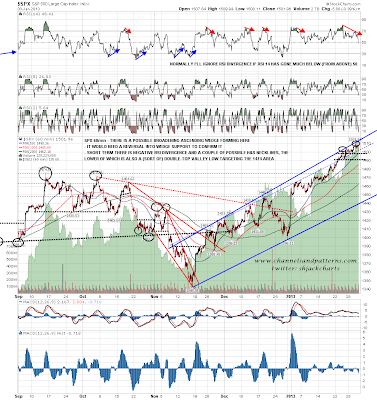 I won’t show the SPX daily chart today but I will show the weekly chart, both to show the bands and also to show that broken and rebroken rising wedge support from the 2011 low is also now in the 1440 area, adding to the natural support there: 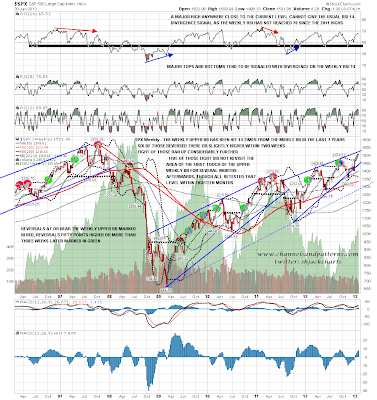 If we are to see a deeper retracement here, then a key chart to watch is the RUT 60min chart, as there is a perfect rising channel there, and any move on SPX below 1490 will most likely be confirmed by a break of this RUT rising channel at the same time. Equally a hit of channel support on RUT is an obvious reversal point if this retracement is going to be another shallow pullback: 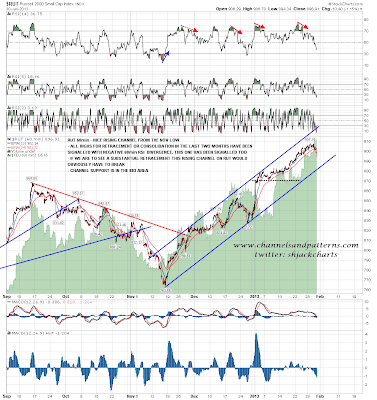 On the ES 60min chart the RSI 14 has touched 30, and has made a marginally lower low after that on positive RSI divergence. We could well see a bounce here. If we see that bounce I will be looking for the 50 hour MA , now at 1499.25, to hold on an hourly close basis. A close back above 1500 would be a discouraging signal for any sort of decent sized retracement over the next few days. There is a possible H&S forming on ES here though the ideal neckline would be in the 1491 area:

Both EURUSD and CL are looking a bit short term toppy here, but there’s not much to add to what I said yesterday so I’m going to follow up yesterday’s post on 30yr treasury yields with more bonds charts.

I was showing the possible IHS forming on 30yr treasury yields yesterday and I was asked whether a similar setup is visible on the 10yr treasury yield chart. Definitely. On the monthly chart of TNX from 1980 I have a falling wedge that has been forming since 1993, and wedge resistance there is at 3.65% and falling. The next obvious move is to test that resistance, and there is a possible IHS forming with the neckline at established resistance in the 24 (2.4%) area. The target for that IHS if it forms would be the 34 area, and by the time TNX reaches that level, wedge resistance may well be there too: 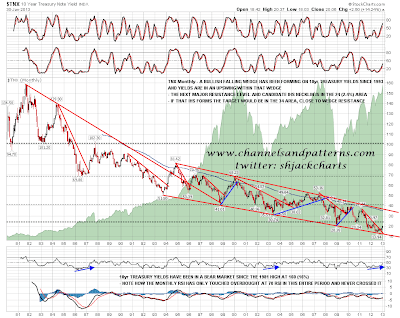 Looking at the ten year TNX chart the picture looks a little different. Declining resistance from the 2007 (second of double-top) high is in the 28.5 area and that is worth noting. The possible IHS setup is the same of course. I have added the QE periods to the chart, from the announcement to the end of QE purchases to show what a powerful effect QE has had increasingly bond yields each time. The current QE is open-ended, which is something to think about when looking at this chart: 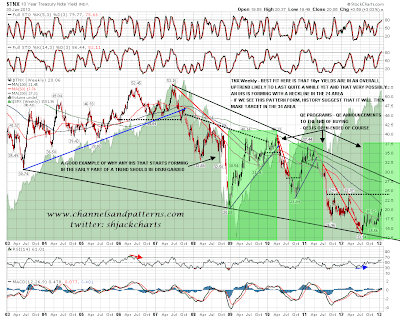 On TLT I only have data back to 2002, but the next big support level is clearly in the 107 area, and that is obviously also a candidate H&S neckline. If that H&S forms and breaks down, the target would be in the 83.8 area, well below rising support from either 2003 or 2007 in the 90-4 area. If those support trendlines were to break down that would be a strong confirmation signal that the three decade long bull market in bonds has indeed ended: 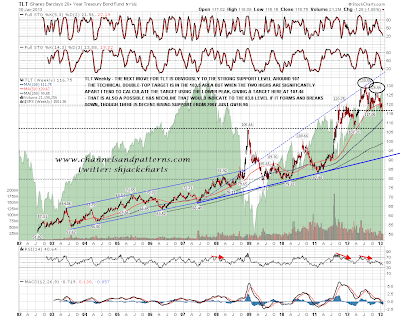 I was asked yesterday what a bear market in bonds would mean for investors. Just to clarify this it would mean that long dated bonds would face large falls in face value, continuing for most likely at least a decade, and that yields on shorter dated bonds would rise to well above inflation. You will note that the yield on the 10 year treasury went from 16% in 1981 to 1.4% in 2012. I have strong resistance on TNX  in the 7% and 10% areas, and weaker resistance in the 8% area. If we are not to see a full retracement of this bull market then I would be looking for failure at one of those.

Full retracement seems a radical idea, but you should consider that the backdrop to that 1981 high was a long period of governments running large deficits, flooding economies with money at negative real interest rates, and trying out doomed financial experiments to try to avoid taking necessary action to bring economies back into balance. Anything sounding familiar? My favorite stupid economic experiment from the 1970s was prices and incomes policies to restrain inflation. These make a fun read for anyone interested. What’s different today? Well governments, companies and households are all carrying a lot more debt, and inflation and unemployment calculations have both been extensively modified to present a less alarming (and most likely less accurate) picture. Otherwise we’re just watching a variation on the same theme by the same authors.

Just to be clear, I think there is only one economic path to prosperity for both households and countries, and that is to work hard and innovate, producing more than you spend, and either saving or investing the balance. This seems a self-evident truth, and historical evidence suggesting otherwise is thin on the ground. Anyone suggesting otherwise is a fool or a charlatan in my view, with high intelligence  sober expressions and a sheaf of PhDs not being a barrier to being either of these, and fools and charlatans are clearly running the show in the developed world at the moment. Until that changes, as it did in the US and UK particularly at the end of the 1970s, real economic outcomes are likely to continue to disappoint.

While I’ve been writing ES has tested support in the 1491 area and I am still seeing clear positive divergence on the 60min RSI. Ideally I would be looking for a bounce into the 1500 area over the next day or so to form the right shoulder on an H&S targeting the 1476 ES area. An hourly close over 1500 would throw a continuing downtrend here into serious doubt.