AAPL beat on profits but disappointed on revenues last night. There was a big reaction and I read of AAPL trading as low as 461 in the after market last night. It may have gone lower. Some of this seems likely to persist into trading hours so we may shortly see the test of the main rising support trendline from early 2009. Will it hold? Depending on what happens on the daily RSI today that currently looks promising for a reversal at this support trendline: 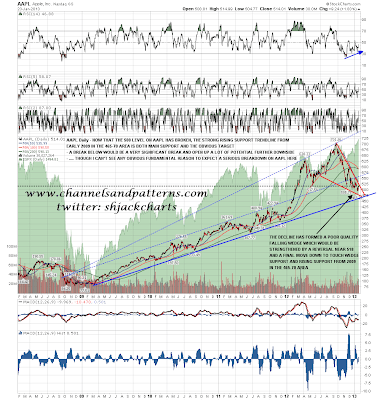 If that trendline should break I have next support on AAPL not far below at rising channel support from 2003 on the weekly (LOG) chart in the 445 area. That's very approximate, plus or minus ten given the scale of the chart. A break below there would look very bearish: 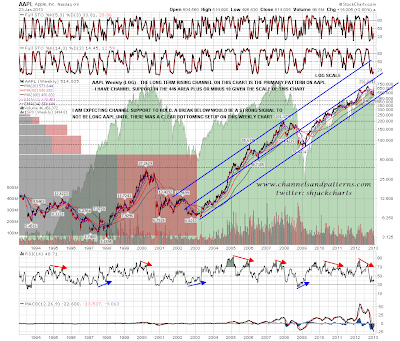 All steep rising support trendlines break eventually, and these are both steep trendlines that have carried AAPL a long way. A break below them might just be a signal that AAPL is finishing a high growth phase and moving towards being a lower margin company with limited growth prospects. One way or another that is likely to happen, as AAPL is huge enough already that growth prospects must be somewhat limited, and faces increasing competition in most markets. On the other hand AAPL products are still superb, their prospects for making very good money in their markets in the future look good, and they are on a forward P/E of just 9, which is modest unless earnings are going to fall a lot from here. I think AAPL will most likely hold one or the other of these trendlines this time. We shall see.

There was a nice double-top that formed on the ES 60min yesterday, and that broke down overnight. As I have mentioned before however, when these patterns fail it tends to be just below the pattern trigger level, and ES reversed back up strongly there. I have strong support in the 1484-5 area, and if we see a break below there we may well then see follow-through to retest the 1475 level. I have a possible channel support trendline there, but it is a poor quality channel so far:

On the SPX 15min chart there is a clearer setup, with yesterday's higher high on negative 15min RSI divergence. If short term rising support in the 1493.5 area breaks then we should see some follow-through, with possible trendline support in the 1480 area fitting well with a target in the 1475 area on ES: 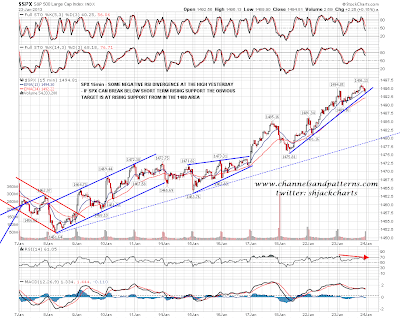 Middle bollinger band support on the SPX daily chart is now in the 1459 area. Statistics still favor SPX touching the middle BB before another touch of the upper BB, now in the 1510 area, though both are rising so fast that this is doubtful as a shorting opportunity. What is worth noting on this chart is that rising wedge resistance on SPX is also now in the 1510 area, and I wouldn't expect that trendline to be broken if this rising wedge is to play out: 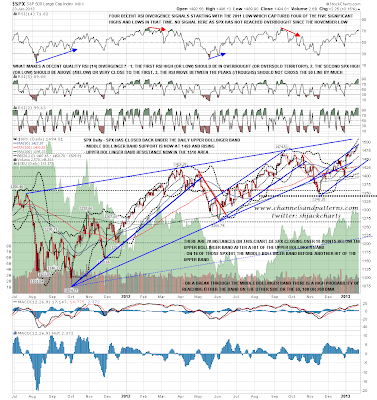 That setup is clearest on the Dow chart, with wedge resistance there now in the 13950 area. If we are seeing a broken rising wedge and double-top setup then the second high would also ideally be not much more than 2% higher than the first, and that target is in the same area. I can't say I have any great confidence that this classic reversal setup will play out, but it is a classic reversal setup, so I'm following it: 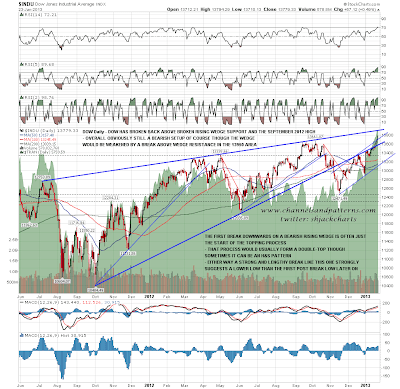 EURUSD is consolidating in a sort of triangle. The obvious next move is up in my view, but there is a possible double-top setup that would trigger on a break below 1.325:

Mainly I'll be watching the SPX 15min chart this morning. If we see that short term support trendline break downwards I would expect some follow through. Nothing to get particularly excited about here on the short side unless we see that happen though.