SPX moved up strongly yesterday and I posted the updated SPX channel on twitter in the afternoon before the high. I posted another after the close and here is that chart for you again this morning: 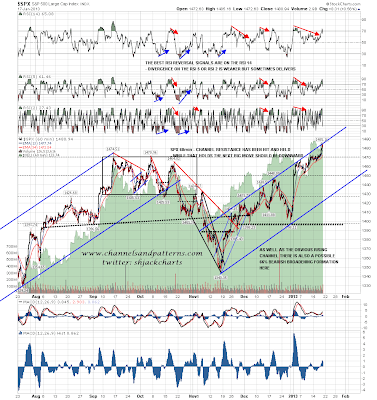 As you can see SPX hit the upper channel trendline again at the high yesterday and reversed there (buffs fingernails modestly). Obviously anything can happen and SPX could break up through that trendline, but that is a strong trendline that has held five times so far, and I'm expecting reversal from there unless we do see an unexpected break above. We may see a test of yesterday's high before a retracement but we won't always get that.

I would also note that if we are seeing a double-top forming on SPX here with the September high as the first peak before the break of the rising wedge from October 2011, then that should ideally be within 3% of the first high, giving an upper limit of 1518.75 for this second high. I prefer the second high to be within 2% for a really high quality pattern and that gives an ideal upper limit of 1504. The second high can sometimes be within 5% of the first, though that weakens the pattern in my view and that gives an upper limit at 1548.25. Anything over 5% apart I would generally not regard as a double-top. Unless we see strong evidence to the contrary I am expecting to see another push up after a retracement from here, and obviously the next high could be a major top: 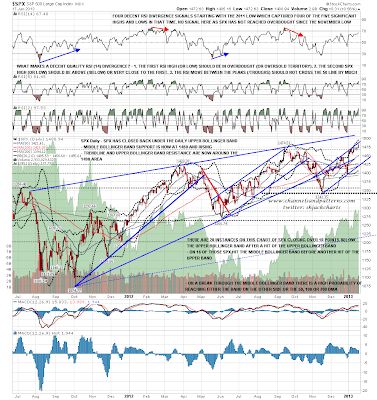 The other big rising wedge to watch here is on Dow of course, and there I am looking at a similar broken rising wedge and candidate double-top forming setup. Dow finally broke back over broken rising wedge support yesterday and is now therefore placed to test the September 2012 high and most likely exceed it. I prefer the second high on a double-top to exceed the first though that doesn't always happen of course: 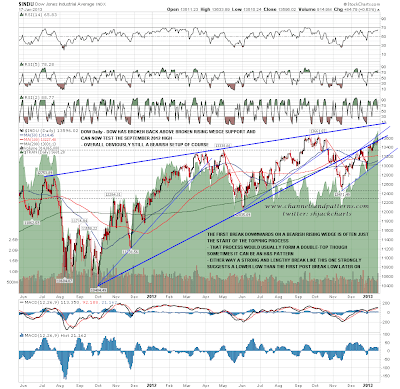 AAPL has rallied considerably in the last couple of days. Is the AAPL downtrend over? I don't think so though possibly. The obvious downside target though is in the 465-70 area at rising support from early 2009 and that hasn't been hit yet. A falling wedge of dubious quality has formed from the high and that could be strengthened considerably by a reversal at declining resistance in the 518-25 area and a last move down to hit wedge support and rising support from early 2009 in the 465-70 area in a week or two. We'll see whether that happens. Obviously we could see AAPL break that support but that would be a big technical breakdown, and I'm not really seeing any fundamental reason to expect that. I am biased as a huge fan of iPhones and iPads though: 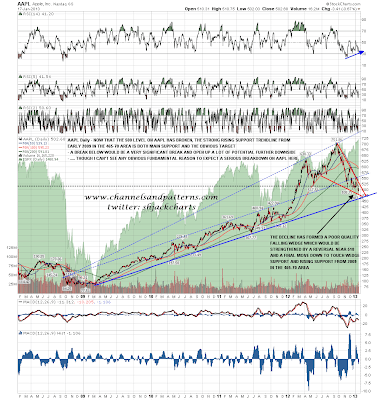 I'm going to show a different view on oil and the Euro today just to give an idea of where I see the bigger picture on both. As I mentioned yesterday there is a big support/resistance level on EURUSD in the 1.35 area and we may see a significant retracement from there. Adding some weight to that is the failure of the H&S that formed in 2010/11 to reach target. As I've mentioned a few times I don't like H&S patterns where the neckline starts early in the previous trend, and you can see that on this example. However where an H&S fails, an H&S pointing in the opposite direction will generally form to confirm the failure, and the obvious horizontal neckline for such a pattern is in the 1.35 area. That's not a sure thing by any means but we may well see a strong reversal there.

There is an argument however that a downsloping H&S has already formed and is playing out, so very possibly not. I'll post that alternate H&S with the target and a possible overall triangle scenario on Monday, though I'll say now that this alternate scenario has an upside target in the 1.42 area at declining resistance from the 2008 high: 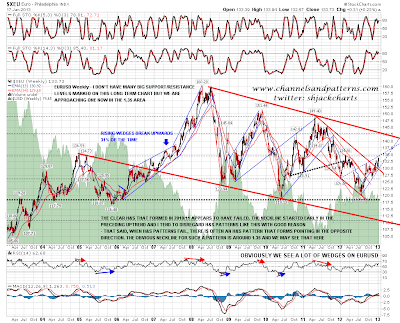 Oil I have charted up on a one year 60min chart (on USO) and that is to illustrate that oil generally forms decent quality and clear patterns or channels on both uptrends and downtrends, with decent reversal patterns more often than not at the point of reversal. There is of course no clear pattern or channel yet on the current move and that generally means that there are not yet enough data points to identify the pattern that is forming. That is often the case early in a trend and the obvious next big high on this move is above 37.17 on USO. I see no reason to expect an end to this move before that and it may go considerably higher. On the fundamental side I'm hearing a lot of chatter that oil prices may drop a lot over the next few months, but I can't see any reason to expect that on the chart at the moment: 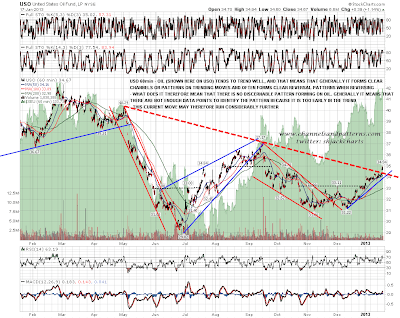 I've been outlining the overall bear case on SPX and Dow here today. That doesn't mean this is necessarily going to happen, and there seems to be general agreement here that equities are poised for a big move up in 2013. What I would say is that I tend to ignore sentiment except as a technical signal, and the setup on SPX and Dow here is a classical bearish topping setup at the moment. That may fail of course, but until it does fail I will be watching it very carefully. Monday is a holiday so my next post will be on Tuesday morning. Everyone have a great holiday weekend! 🙂