ES went lower after the open yesterday, but the positive divergence on the 60min RSI only increased in force and we are now seeing the bounce from that. It is possible that the retracement low is in, but I don’t think so, I have two main scenarios here and both are assuming that a topping pattern is forming that would target the 1460 ES area, which is a decent fit with the main downside targets that I was giving yesterday. The first option is that an H&S is forming, in which case the ideal right shoulder high would be in the 1511 area. The second is that we have seen the first high of an interim double-top, and if we see a confident break over 1511 today this will be my main scenario. That would obviously assume a test of the current highs. Here’s how that looks on the ES 60min chart:

I tend to prefer pretty H&S patterns and I have to say that this one is not pretty on either ES or SPX. That increases the chances of the double-top option in my view: 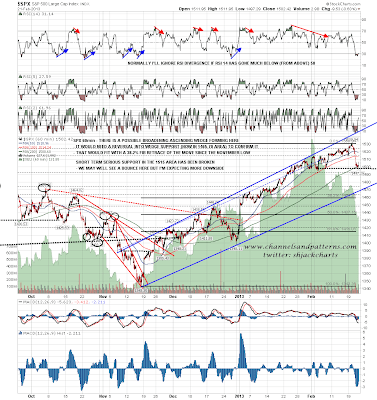 What are the chances that the retracement low is already in? I don’t think it is but much depends on what happens on TLT and DX particularly over the next few days, and it’s worth noting that the low on NDX yesterday hit major support in the 2700 area: 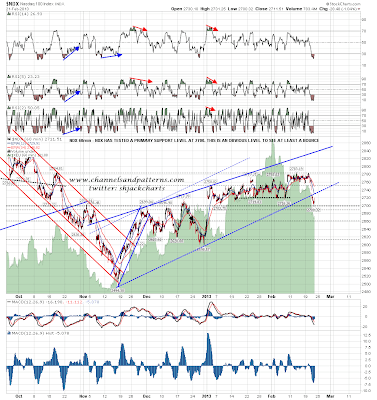 TLT has been forming a nice looking double-bottom setup that I have posted two or three times over the last few days. For this to play out the first key resistance level is at declining resistance from 125.52 and that was tested yesterday. If that breaks then the break opens up a lot of upside for a bounce but it must obviously break first for that to happen: 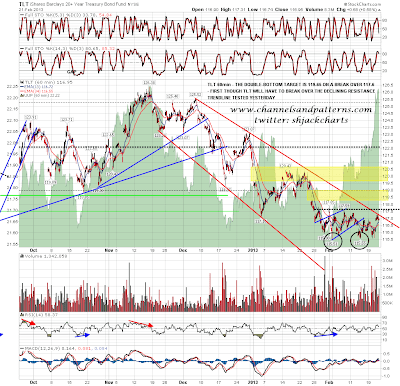 I’ve been putting the bull case on USD for the last few days, and we are now at the key moment of truth on DX. The double-bottom I’ve been looking at has triggered but there has been no confident break above 81.5 as yet. When double-bottoms fail this is where they fail so we need to see what happens here. Looking again at this setup I see that the conservative target is in the 84 area rather than the 83.5 area I gave yesterday, so this points directly to a test of the 2012 high:

In the short term I’m seeing some retracement on DX as likely in any case here, because EURUSD is forming a nice looking short term double-bottom at established support at 1.357 on strongly positive RSI divergence. On a break above 1.3245 the double-bottom target is in the 1.333 area and declining resistance is now at 1.338. On a break below 1.315 I have the likely target in the 1.29 area at both trendline and level support there:

On CL the double-top target is in the 92.4 area, and the low yesterday was at 92.6. That’s close enough to qualify as a hit. There’s no strong sign of reversal yet and a possible bear flag is forming:

I didn’t post the copper chart yesterday so I’ll close with it today. I have strong trendline and symmetrical triangle support on HG in the 350 area and that hasn’t been hit yet. This pattern has now been forming for 18 months and it will be very interesting to see which way it will break:

So what should we see today? On my H&S scenario the bounce is almost played out, and we should see reversal at or near 1511 ES. We’ll see how that goes. For my double-top scenario I’m watching a possible small IHS on ES with the neckline at 1510 and the target at 1525. If the right shoulder forms on that pattern we should see a reversal here to 1506/7 and then a break over 1510/1 resistance. The key levels to watch this morning are 1510/1 and the 50 hour moving average at 1508, so ES is currently trading above the 50 HMA. If it holds above and breaks up through 1511 that will obviously strongly favor a test of the current highs.