I've been buying and driving cars for twenty years now, and I have steadfastly bought Japanese, German, and Swedish cars. I have always had a deep disdain for the design and features of American automobiles, and the only times I've been forced to drive them – – – during rare business trips by way of rental cars – – my negative feelings toward them were only strengthened.

The spell is broken, however, with my new Tesla. I put the reservation in on this last year, and I picked it up today at the factory (after receiving a full tour of the place). Here's a fun fact: when General Motors went into bankruptcy in 2008, they did a fire sale of the huge auto plant in Fremont. The land and physical plant were on the books for $1 billion. Tesla bought the place for $42 million. How's that for a great bargain?

So here is my new all-electric, ungodly fast vehicle:

Of course, it's more of a computer that comes with a car rather than the other way around. I'll be able to stay on top of things no matter what:

SPX went nowhere on Friday, closing the week some 15 points below the weekly upper bollinger band. This doesn't mean much in terms of retracement, but as this band is still rising at 10 or so points per week, if SPX continues to hug the upper band then that gives potential upside of 25 points from Friday's close into strong resistance. That's well worth bearing in mind: 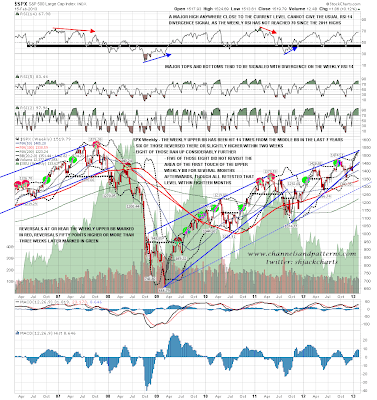 END_OF_DOCUMENT_TOKEN_TO_BE_REPLACED

I have recently been mulling over a post financial crisis phenomena. That phenomena is the increasing tendency of business leaders, policy makers and politicians to lie, spin and bullshit on a constant basis and in such an obvious manner that even the most cursory level of analysis and critical thought reveals the lie.

1.      This past week the G-7 and G-20 group of leaders were meeting and the topic du jour is "currency wars". Japan has recently gone Full Monty in the money printing department where they are not even bothering with the ruse of claiming their "independent" central bank is just managing money supply rather than the more offensive printing to devaluate. Ironically  they have become somewhat more honest in their efforts to manipulate their currency lower in order to sell more Toyota at the expense of German Volkswagens.

The other G-7 countries have responded to this by saying "we must do everything possible to avoid currency wars" and then they go on to say that "a country is not engaged in a currency war so long as the reason they are money printing is to improve their domestic economy and not to devalue their currency". If their currency ends up being devalued as a by-product, well that is OK. So as long as you don't say the reason you are printing money is to devalue your currency then you are not in a currency war. It's kind of like firing missiles at your neighbour not being an act of war as long as you don't say it is an act of war.

2.      China miraculously always reports economic numbers which show their economy is growing by 8% per year. This week they reported a 25% increase in exports to countries which simultaneously reported a decrease in imports from China. Somebody must be lying…

3.      Public companies have raised the practice of excluding "extra-ordinary items" from their earnings  reports to an art form. Of course these "ex-out items" are always losses, with the result being that their exclusion increases reported earnings and creates the superficial impression that their stocks are cheap. The practice is so endemic that aggregate reported operating earnings are now 15-20% higher than real earnings…. each and every quarter…. without fail.

4.      The US government insists that its debt/GDP is lower than all the other western countries with a reported ratio of 83%. They get to this number by subtracting all the US Treasuries held by their Social Security Fund to pay for public pensions. So they conveniently subtract the assets of the Fund from their debts but don't bother to add the liabilities of the Fund, which would be on the order of a further 75% of GDP. If they just included these bonds held by Social Security (like all the other countries do), their debt/gdp would be 108%, putting them just behind Italy and Greece in the shitty credit category.

5.      And the big lie to beat all big lies (with the exception of there not being any anthropologic climate change, of course) is the Federal Reserve buying trillions of dollars in US government bonds in order to artificially suppress interest rates so we will all be forced to pay too much for other assets in order to actually earn some yield. Their logic is that if they artificially boost the price of risky assets we will all be fooled into thinking the world is growing more prosperous by this "wealth effect" and this will raise our confidence and "release the animal spirits".

As a result, they believe, with this renewed confidence we will all go out and spend like a bunch of drunken sailors, and businesses will confidently build new factories so that the myth of prosperity will morph into the reality of prosperity. The deception is that the wealth created by any asset arises from the future income it generates (or the expenses it eliminates) not the price you pay for it.  By forcing people to pay too much for assets you are reducing their wealth, not increasing it.

So my open question to all Slope of Hope readers relates to the impact of chronic exposure to  saturation lying. I believe that the people which are actually paying attention to world events can easily see through the saturation lying and have a pretty good idea about the true state of the world. I also believe that the "American Idol" masses aren't even listening to the lies, so for them at least it is falling on deaf ears. Furthermore, even though the unwashed masses are poorly informed, they still possess a collective wisdom that tells them that all is  not right in Hooterville. So what purpose do the lies serve and what impact do they have on our confidence to invest and spend in the future? Do we willingly go along with the lies because it is consumes less energy than building the proverbial bunker, or do we become more conservative and cautious?

As a side note I think the primary audience for the "everything is OK" meme being spread relentlessly could be the algo machines. The headline this weekend that they will "read" is that "G20 agrees to avoid currency wars" (FT). The algos either don't know or don't care that it is a lie and so their deductive logic will be: "Not being in war is good thing…buy stocks, sell Yen". So the mere fact that machines dominate trading volumes and can't tell a lie from the truth makes the lie effective, no matter how ridiculous we carbon based life forms find it.