May, 2012:  “Gary = Dumb Investor”, which was a memorable comment
response (among many) to the SeekingAlpha version of this bullish
article:  Dumb Money Sold in May and Went Away

Presently, I am an “idiot” and a “doomer” for being ‘risk vs. reward’ bearish on the US markets.

Promotion (Dictionary.com): something devised to publicize or advertise a product, cause, institution, etc.

The title implies a bear writer about to write bearish things.  I get
it.  I guess I am a bear writer now because I can no longer be a bull
writer.  That is because my b/s detector is calibrated to its most
sensitive setting and usually begins sounding early.  The b/s detector
went off early last May and the bullish analysis had to endure through a
very volatile summer.  Now it is the same, in reverse.

END_OF_DOCUMENT_TOKEN_TO_BE_REPLACED

As long as I've been doing this, I can still be astonished at charts. My charts, at least.

Everyone knows the HerbaLife story. I have no position, and given what's going on, I kind of lost interest in shorting this issue, but I just now glanced at the stock.

Let's take a really close look at that trendline, shall we?

This is as unscientific as it gets, but I think we bears might be getting an upper paw here. This is the second day in a row I've been totally short and have shown a profit all day long in spite of the market being bid up by TPTB. (The Russell is, once again today, making an all-time high price, higher than at any time in human history).

Something tells me our bullish friends may be out of gas. We'll see…….

A long-standing favorite short of mine has been Apache, whose magnificent diamond pattern I've pointed out before. This looks like an amazing long-term short.

I think equities may well fall today, but if that isn't the case, the anchor for the close today is the weekly upper bollinger band on SPX, and that is now at 1534. If we are to see a close hugging this band for yet another week, I'd expect the close today to be in the 1526-34 area, ideally near 1530: 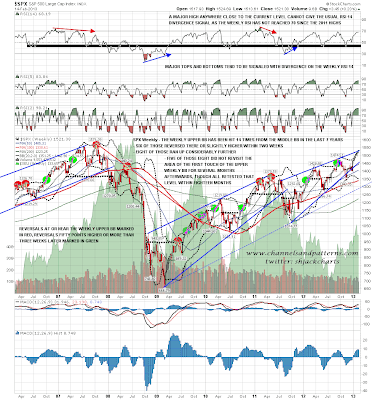