The amount of negative press coverage emanating from Washington in relation to President Trump since his election last November has been relentless and, at times, apoplectic. This is simply my unbiased observation, as I do not condone or condemn any of it.

So far, the equity markets have ignored the rants from the media and political opponents. The SPX is hovering at all-time highs, as shown on the following Monthly chart, and has gained 12.2% since the election, as shown on the percentages-gained graph below of the Major Indices.

On the face of it, it appears that the perception of equity markets, in general, is that it’s “business as usual,” regardless of all the roller-coaster (almost) daily “anonymously-sourced political revelations” (which may, or may not, have been fact-based truths and which have, so far, been perceived to be fairly minor in the grand scheme of things). 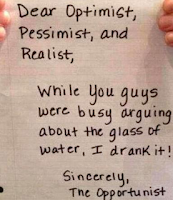 However, at the point when “minor” issues morph into “major issues” and are backed up by repetition and persuasion with the presentation of credible facts, you may, finally, see a major dent made in bullish market sentiment.

Until then, these “whiffs” of potential scandals don’t seem to present enough of a major barrier to continued support for equities, and the “buy-the-dip” opportunists will likely continue to take advantage of the current tumultuous political environment.