The US dollar has been in a free-fall for pretty much all of 2011, but there's a chance it might be reaching a crossroads. The EUR/USD graph below shows that the surge in the Euro's value is reaching (1) a descending trendline; (2) a Fibonacci fan line (3) the most recent medium-term top, from November 3 of last year.

Of course, the Euro could just keep soaring, but this confluence of possible resistance levels is worth noting.

As you might guess, I'm not in the chattiest of moods right now, so this is probably my final post today. I'll put up any guest posts that happen to come up later. Good night.

Well, this has been a pretty rough day for the bears. It seems that all of the "bad" news has suddenly turned around. The nuclear problem is under control; Libya seems manageable; big corporate buyouts are happening. In short, the past three days have been totally owned by the bulls.

I've reduced my risk in the face of this, and I'm presently 57% committed and tending to my wounds. We haven't violated the series of lower highs, but one more day like this would do serious technical damage to the short-term bear case.

A Sloper wrote me this morning about his web site, and there was a particularly interesting chart from it, which he said I could publish here:

A Vix Buy Signal for equities triggered on Friday, after the Vix traded above the daily bollinger bands, then closed back inside, then fell the next day. We often see these at the start of big bull moves and they're fairly reliable bullish indicators, though as you can see from the chart below, they sometimes precede sharp dips, and the one triggered on the bounce just after the flash crash last year was not a buying opportunity: 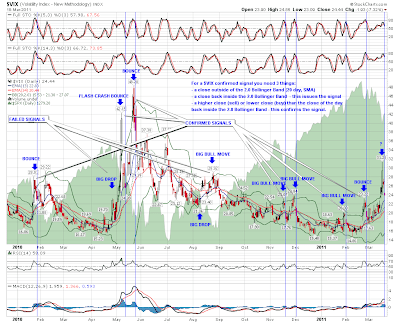 My ES and NQ targets aren't any different really from the ones I gave in Friday's post, and you can see those here. One thing I noticed over the weekend was that an IHS has formed on the SPX 15min chart, as well as a rising wedge. I'm not wild about the quality of the IHS though and am expecting one to form, if one does form, at one of the potential necklines further up: 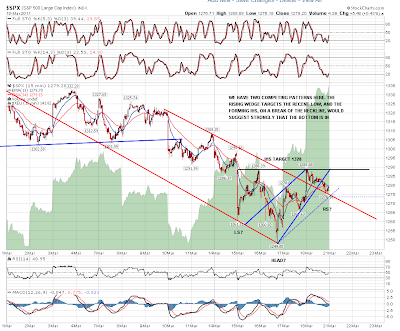 We've seen a strong rise overnight, but I have mixed feelings about it. We're seeing some negative divergence on the ES & NQ 15min charts, and copper has not confirmed the rise so far. I'm still watching the IHS on copper that I charted on Friday and it hasn't broken up yet:

Oil's likely to be interesting this week, with civil war in Libya and trouble elsewhere in the Middle East still. We've put in a decent looking right shoulder on the IHS I posted on Friday and if oil breaks 104 with confidence 'll be looking for a new high at 110:

I've got a declining channel on silver that I'm watching with interest today. So far it has failed perfectly at channel resistance with negative divergence on the hourly RSI. If it fails to break up I'll be looking for a downside target in the 33.2 area: 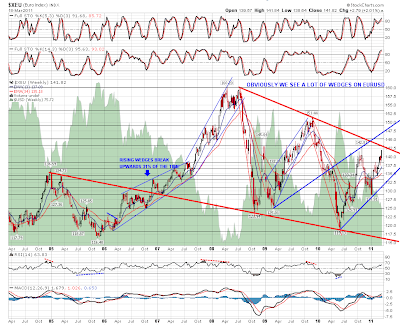 We're looking at a big gap up this morning, and obviously ES and NQ might just gap and go, though I'm not really seeing much evidence to support that so far. If ES and NQ break the overnight highs with confidence that will look bullish for today, and those are at 1291.25 and 2251.5 respectively. I'll also be watching the copper chart, but with copper at 431.5 at the time of writing, a break up before ES and NQ looks unlikely.