I mentioned EFA as a good short a couple of trading days ago. That was a little soon, considering yesterday's big surge across the board in equities, but I'd like to offer this chart again, since the retracement seems to be a superb shorting opportunity.

I entered a short position on TBT this morning. For one thing, I think interest rates are going to head lower, which will depress this security, and second, these "ultra" ETFs are inclined to degrade anyway. My stop is at 37.33 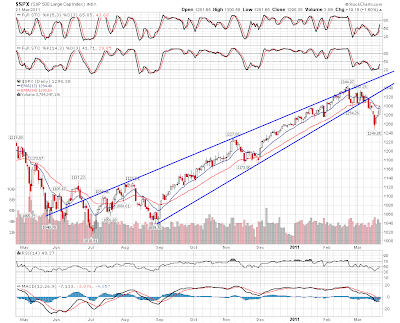 Unexpected price moves aren't always significant of course, but they can signal that a significant change is taking place, and they are placing a marker for a new trendline for a channel or pattern. Looking at SPX now, it appears that the overthrow was setting up a slightly steeper upper trendline for a rising channel, and that the recent low has confirmed the lower trendline of that channel. Here's how it now looks on the SPX daily chart: 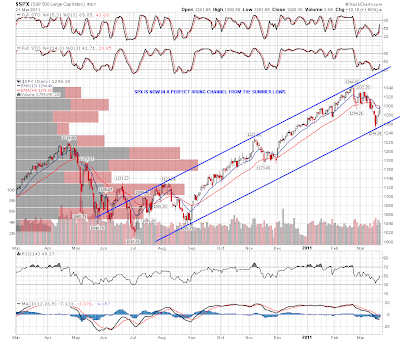 This isn't welcome news, as I've been looking for a decent classical low for this move with positive divergence on the SPX daily chart, and with this atypical rising wedge turned channel now established, I think that is now much less likely, though I haven't eliminated it as a possibility.

Short term ES and NQ look weak. ES formed a rising wedge last week which broke down on Friday. The lower trendline for a rising channel from that wedge was established overnight and that has broken down too. ES also made a nice looking double top overnight on negative RSI divergence, so until ES can get over the high for yesterday and overnight the setup looks bearish. NQ is also underperforming ES which likewise looks bearish. Here's the ES 60min chart:

I was doubtful about much upside from the open yesterday in part because copper was retracing. It has now formed a solid low for right shoulder of the forming IHS, and should rise soon if the IHS is going to play out. I'm watching to see whether copper can get much above 430 and the IHS neckline is just under 438:

Vix has broken back down through the support trendline for the first part of the correction, which is a signal that the correction may well have bottomed: 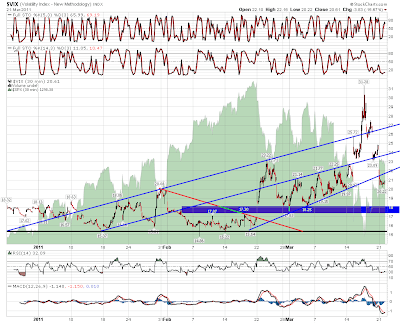 EURUSD is now very close to the declining resistance trendline from the 2008 high, and on close inspection that is at just under 1.43. It could well reverse there though I'm expecting it to break up on the balance of probability: 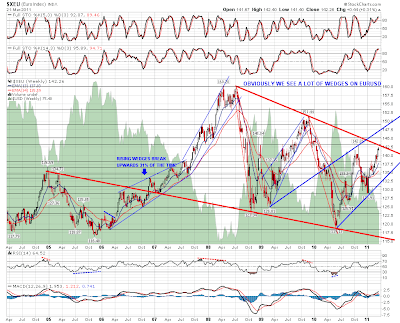 I've started posting links to intraday charts and some charts that don't make the cut for my daily posts on twitter, as I was already using it to follow some traders and chartists, and my twitter handle is shjack666 for anyone who'd like to follow those.