Last week was very volatile, with trouble in the Middle East that is still unresolved, and everyone was waiting to see whether equities would make new lows, but they didn't, and as long as they don't the trend is still upward. Equities were moving roughly inversely to oil last week, but were stronger than a pure inverse correlation would require. Here's SPY vs USO on the 15min chart: 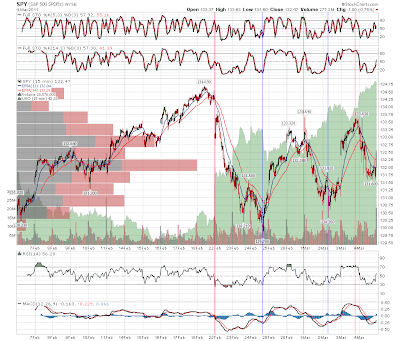 A new low wouldn't be required to show reach weakness on SPX however, and a break of trendline support would get us there. That support is in the 1308 area today 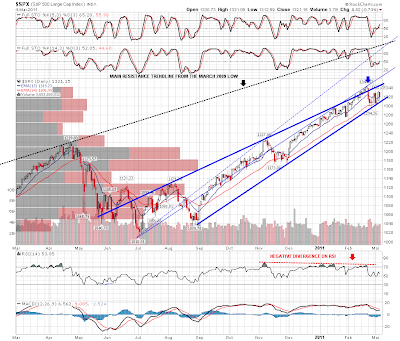 Since the low NQ has been making higher highs and higher lows, and is now up almost 100 from the 2280 low. Given that the high was at 2403, that puts NQ within striking distance of new highs:

The overall picture remains somewhat ambiguous though. Copper looks weak, and has been hanging around in ther 245 to 255 area too long. The rising channel was broken on Friday and the IHS looks overcooked. A break below 245 on copper would look bearish for both copper and equities:

Silver made my 35.7 IHS target and gold has also made new highs. I have a possible rising wedge on gold with a target in the 482-5 area:

Overall the outlook looks cautiously bullish though the geopolitical risk still looks high. I'm watching copper particularly for a signal that equities might break down.