The two Weekly ratio charts below depict the SPX vs VIX and the RUT vs RVX.

Very simply, you can see that each rally made by these two Indices since the lows of three years ago has produced an increasingly steep advance before it pulled back. The current rally from the June lows of this year is almost starting to exhibit a "parabolic" steepness to it. It may run for awhile yet before potentially plunging. However, volumes these past couple of weeks has been very low, and whether this is a precursor to a change in trend remains to be seen.

Price on both charts has reached the top of a channel. The current rally may have run out of steam, and we may see price either pull back or consolidate at the highs to produce more of the same kind of roller coaster intraday activity that we've seen recently. Alternatively, we could see an acceleration of the rally to an even greater parabolic steepness, but I would expect that higher volumes would have to enter these markets to produce this kind of scenario. Near-term support levels are 95.00 on the SPX:VIX and 40.00 on the RUT:RVX.

These are important ones to watch over the coming days/weeks, particularly in the run-up to the Jackson Hole Symposium from August 30th to September 1st, and the FOMC Meeting results and Fed Chairman's press conference on September 13th (as well as the Eurogroup Meetings on September 15th and the European Council Finance Ministers Meeting on September 16th). 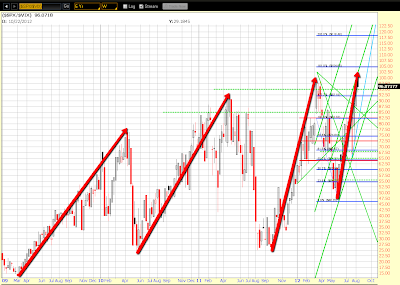 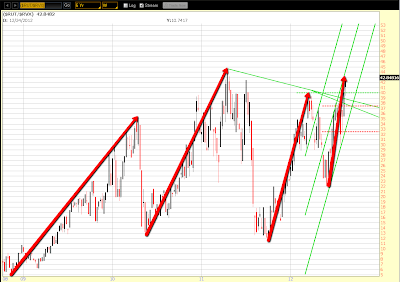 https://slopeofhope.com/2012/08/the-rush-to-crush-volatility.html
The “Rush to Crush” Volatility