A couple of weeks ago, the Silicon Valley went completely ga-ga over the fact that Marissa Mayer left Google and took the helm at Yahoo.

There are a couple of things about this that spring to mind.

First is: Yahoo sucks. I have been online since 1981, and I've been plopped in front of a computer tens of thousands of hours since then, and I imagine I've spent a grand total of 5 hours – tops – on any Yahoo site. Even in the earliest days of the web, I thought Yahoo was suck-tacular, and I've never understood its success. At all.

END_OF_DOCUMENT_TOKEN_TO_BE_REPLACED

If you are like me, and live in a swing-state for this 2012 election, you are absolutely sick and tired of the ads, smears, lies, and just everything politics. I give more thought to moving to North Dakota every time an election cycle rolls around just to avoid the onslaught of ads, mailings, and phone calls.

But my question to you is, how does the market fare when it comes to a President seeking re-election? What is the norm and how does the market tend to react. As a result, I looked at every successful and unsuccessful re-election bid, dating back 32 years to to the Carter Vs. Reagan election to see if there was anything worth noting particularly from August through November (Elections occur on the second Tuesday of the month).

Despite the 70's being pretty miserable for the economy, from August to November things seemed 'suddenly favorable' when Carter's re-election came up. In particular the early part of August. What this chart should show you though (and later with Bush Sr.) is that despite a market rally into the election, it is no guarantee that a President will be re-elected.

END_OF_DOCUMENT_TOKEN_TO_BE_REPLACED

Although I covered my TLT short yesterday, I re-entered it today in a bigger way once the ZB nailed its 149.25 neckline. This was a "to-the-penny" kind of retracement.

Looking at the TLT chart itself, my target remains about $122. It's going to take a little patience, but I think we're going ot get there.

TLT is my only big short right now; my dozens of other positions are, as you might have guessed, scattered amongst many tiny equity shorts.

XLF, the Financials ETF, is currently trading in a "triangle within a triangle," as shown on the Daily chart below. I'll be watching to see if price pushes and holds above the smaller one. Apex support is at 14.74ish and Apex resistance is at 15.20ish. Also, a bearish "Death Cross" formation has been narrowly averted, so far.

Strengthening Financials are important to any further advance on the S&P 500 Index, in my opinion, and this ETF is one to watch over the next days/weeks, particularly since it is still trading in the October 2008 lows and has never recovered to the 2007 high of 38.15. 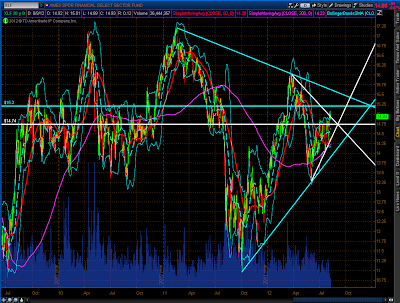