SPX broke up with confidence from the daily lower bollinger band yesterday and the obvious targets and resistance levels above are the 50 DMA in the 1434.5 area and the middle bollinger band in the 1436.5 area. Looking at the NDX chart as well I'm expecting the mid-1430s to be tested today: 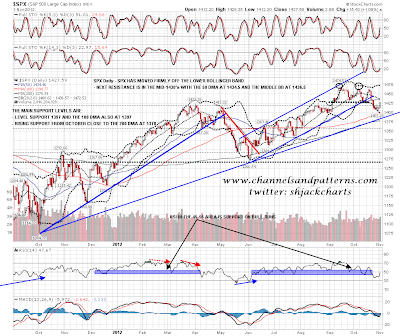 On the SPX 60min chart the W bottom target is in the 1437 area which fits with a test of the daily middle bollinger band: 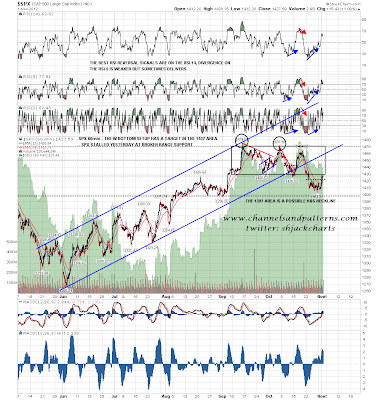 On ES the IHS I have been looking at this week broke up yesterday with a target in the 1444 area. I'm not sure how seriously to take this in the absence of any confirming pattern elsewhere. However I would note that the next two big resistance levels are at 1432 and 1444.5, and 1444.5 is obviously a good fit with that IHS target:

On NDX the upside target is obvious at declining channel resistance. That is in the 2715 area today very close to the broken support trendline. That is strong resistance and if it breaks I'll be thinking that a significant low has been made: 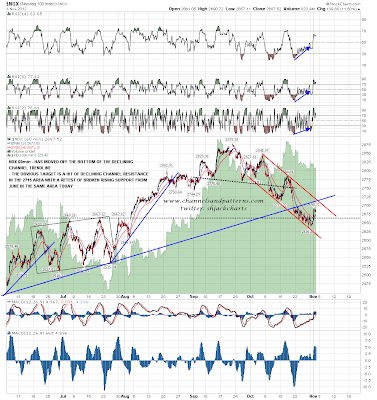 On NQ declining channel resistance is just above at 2691. On balance I'm expecting this to break but it's worth noting:

EURUSD was puzzling yesterday. The IHS that was forming failed to make it back to to the neckline and then broke down to make a new short term low overnight. Nonetheless on the slightly bigger picture EURUSD has been making higher lows and highs and if that is going to continue there will be a bounce soon:

As I've been writing NQ is breaking over declining channel resistance and ES is spiking up over 1430. There is very significant resistance on ES in the 1432 area and we'll see how that performs. A hit of the mid-1430s on SPX during trading hours now looks certain.

The main thing I will be watching today is declining channel resistance on NDX. NDX has led this decline and a break of the declining channel should signal that a significant low has been made. A strong reversal there would obviously signal continuation of the decline and SPX will also be hitting significant resistance at the 50 DMA and daily middle bollinger band today.