The gentle rising channel I was looking at yesterday on the ES 60min chart is still holding this morning, with channel support and resistance in the 1460.5 and 1481.5 areas respectively. ES is making marginal new highs and lows and I won't be looking for significant downside unless ES either gets near to channel resistance or breaks channel support:

On the SPX daily chart the high yesterday was less than a point away from the September high at 1474.51. That may well therefore be broken today. I have rising channel resistance in the 1485 area and the  daily upper bollinger band at 1491. Statistically we would normally at this stage see a test of the daily middle bollinger band before another test of the upper BB and that's now at 1449: 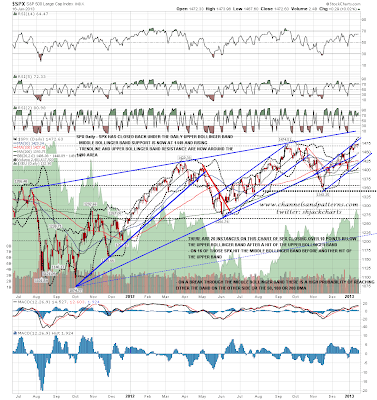 I was saying yesterday morning that EURUSD looked like it had bottomed or was bottoming. It then made a very marginal new low and spiked up over 1.333. The next obvious move is a new rally high over 1.34 and there is a lot of trendline resistance on the upside. On the larger scale charts 1.35 is a big resistance area to watch and a possible major IHS neckline, so I'll be watching that area with great interest. If the IHS forms I would expect a big reversal from near 1.35 back into the 1.25 to 1.30 area to form the right shoulder:

CL looks a bit more promising for bears today, if only because CL is testing the top of the current consolidation range. The obvious next move is a last retracement to test main rising support in the 92.5 to 93 area and we may well see that today and tomorrow:

I posted the gold chart yesterday and I'm posting the silver chart this morning. There are significant differences between the charts but in essence they are singing the same song. In the background is a huge descending triangle that has broken up and promises great things as long as strong support in the 26 area holds. Shorter term silver is paused at the 50 DMA on the way to trendline resistance on a small bullish broadening descending wedge: 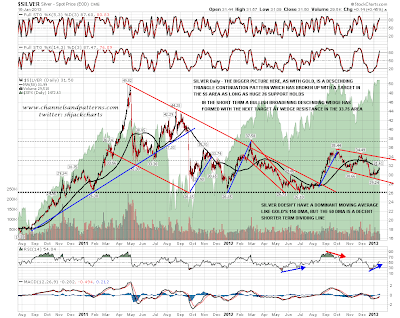 There has been much excitement this week about the new lifetime highs on RUT and TRAN. Time to pile in on the long side? Not so much. On the 20 year RUT chart you can see that I only found one instance in the last 20 years where the breakout level over a significant resistance area was not at least retested over the next few months and many of these retraced far below: 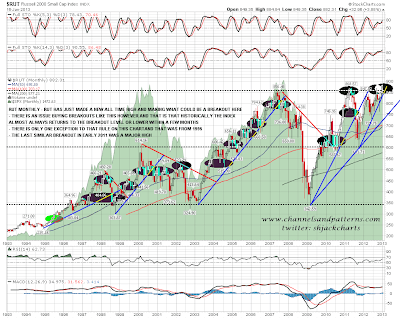 Looking at just new lifetime highs on the TRAN chart, I found three breakouts in the last 20 years that held above the breakout level for at least a year. A further three were at or close to major highs, and the remaining five retraced well below the breakout level within three months. That's what you would expect really, the last new lifetime high on SPX in 2007 was a major top and anyone buying there has been waiting a long while to even get back to within 10% of that. I'm not aware of any investor's maxims that start with 'Buy High': 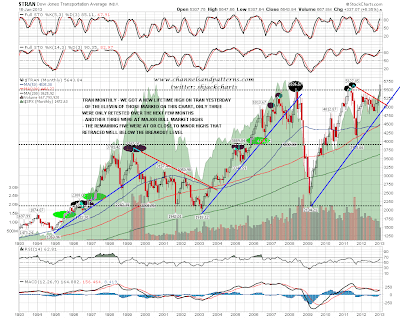 ES is looking strong at 1470 as I write this. A marginal new high over yesterday's high has now been made and the odds for an early retracement to fill the gap look decent. Bears haven't much to get excited about longer term unless ES can either make it to 1481.5 area channel resistance or break below 1460.5 area channel support.