Just as I was becoming concerned that SPX would rise enough to unravel the very nice looking interim top setup on the daily RSI, we have finally seen the initial decline that should mark the start of the decline from that interim top. SPX closed on the daily middle bollinger band and it's just possible that the decline is now complete, but the odds favor more downside and I'll be talking about downside targets today, putting off my look at the resistance levels at the 2000 and 2007 SPX highs for a few days. Here is the SPX daily chart below showing the hit of the middle bollinger band with lower bollinger band support now in the 1490 area: 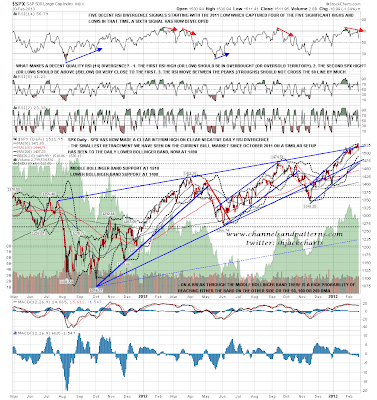 On the SPX 60min chart there is only one obvious target for this retracement and that is at rising support from the November low, now in the 1465-70 area. As I have shown on the chart this would also be a decent fit with a 38.2% fib retracement of the move up since the November low. There is an alternate scenario that I am considering and that would involve the formation of an H&S at the strong 1495/6 support level That would have a target slightly lower in the 1460 area and that would be an exact fit with that 38.2% fib retracement: Short term for today however, ES is showing strong signs of reversal, with strong positive divergence on the 60min RSI. I have a couple of scenarios here. There is obviously now resistance at broken support in the 1511 area, but I also have a possible IHS neckline in the 1509/10 area. If that was to form and break up that would target the 1517-9 area, for a test of the 50 hour moving average, which is now a key resistance level. That would obviously need to hold, though a break above might well be to form a double-top with a target in the 1470-5 area, also a decent fit with the obvious SPX targets:

There is a word of caution to add here though looking at the SPX weekly chart. Where I think we are now is at the interim high before the main spring high that will precede the usual summer retracement. We have examples of similar setups in 2010, 2011 (cyclical bull market top) and 2012. Of those 2012 saw the smallest retracement at this stage, just to the daily lower bollinger band, but the 2011 interim top retracement made it to the weekly middle bollinger band (now at 1445) and the 2010 interim top retracement made it all the way back to the weekly lower bollinger band (now at 1350). I'm not expecting a move below very strong support in the 1450 area, but it's worth bearing in mind: 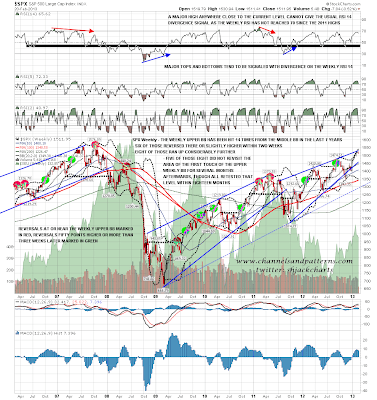 I'm struggling to keep the chart count down today, and will just mention that copper has broken down with triangle support at 350 and primary trendline support (poss H&S neckline) at 332. Oil reversed at 97 resistance yesterday and broke below the trigger level at 95 for a perfect double-top targeting the 92 area. I'm expecting this pattern to make target. For the chart after this one I would like to draw your attention to this topping sequence on CL, with the initial support trendline break, the H&S that formed and failed, and the second high of a double-top made after that H&S failed to break downwards:

The next chart is the DX chart, and I was talking about the possible bullish setup on this yesterday morning. Since then EURUSD has broken both short term support and rising support from the 2012 low, which is very bearish. On DX the bounce from the neckline of the completed H&S pattern has broken above the right shoulder high of this H&S and a double-bottom has triggered with a target in the 83.5 area, not far below the test of the 2012 high. I'm expecting more upside, we may well see that 2012 high tested, and that test could well be the second high of a double-top, just as we have seen on an identical sequence of events on CL in 2013. Meanwhile, despite the best efforts of the Fed to debase the currency they are charged with protecting, the outlook for DX here is looking distinctly bullish:

I posted a chart earlier this week showing the test of primary rising support from the 2008 low on silver. Silver has now broken below that and the outlook for precious metals is now looking bearish. The next target for silver is a test of the very strong support level in the 26.10 to 26.30 area and that could well hold, as gold is also likely to be testing strong support at the same time. If silver breaks below that I will be looking at the next very strong support level in the 19.5 area. I'm still bullish on gold and silver longer term and if we should see silver test the 19.5 level I'll be looking to go long there: 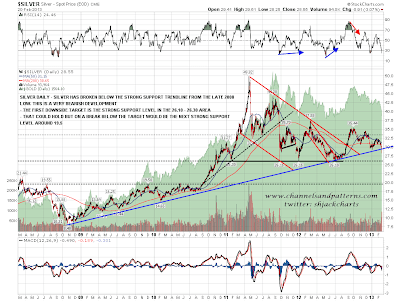 I was asked about CADUSD after yesterday's post as I hadn't included it in my USD analysis. I hadn't included it because it is under 10% of the USD index, albeit only just under, but I'll close with that today. The overall setup on CADUSD looks bearish, with the 2011 high still unchallenged and a rising wedge target in the 76.5 area, though I wouldn't treat that as a high probability target. I have two key support levels on CAD to watch, which are possible but currently very theoretical rising channel support in the 97 area, and trendline support in the 96 area. That trendline support in the 96 area is the neckline on a possible H&S that would indicate to the 81.5 area on a clear break below 96, though I don't much like the pattern as the right shoulder has taken twice as long as the left shoulder to form. It is still worth noting however and a break below 96 would look bearish with next important support at 93.84. I've also done a chart on AUDUSD that anyone interested can see here: 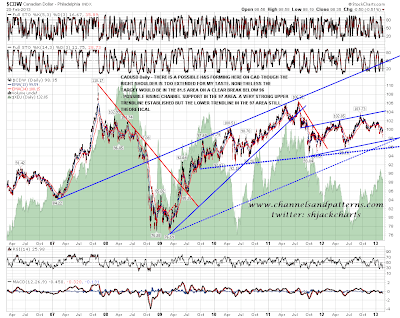 For today on ES I'm leaning towards a bounce , as I've detailed above the ES chart third from the top on this post. If we see a strong reversal at 1510/11 then the next big support level (and candidate H&S neckline) is at 1491. A bounce there would have a right shoulder high target back at 1510/11 resistance. As I mentioned earlier, a clear break above the ES 50 hour moving average, now at 1518.75, would suggest a retest of the highs before (most likely) more downside.