For years, the fellows on ZeroHedge – – and, on occasion, here on SlopeOfHope.com – – have teased fabled commentator Dennis Gartman for his financial picks. It seems that he is driven in no small part by whatever is hot or cold at a given time. In other words, seat-of-the-pants emotions seem to be an important element in the ideas offered.

However, I’ve stumbled upon someone who seems to completely out-Gartman Gartman, and although I know very little about the man himself, he has a huge YouTube following. His channel on YouTube is called “Financial Education”.

I stumbled across this fellow for the first time because of some videos he posted about Tesla. Over the course of just 48 hours, he released at least five lengthy videos about why Tesla was an amazing stock to buy or, alternately, why it must be dumped immediately. As you can tell from the change of facial expressions below, he went from ecstatically proclaiming that Tesla was heading to $3,000 per share (September 27th, at the bottom) to a declaration that I’m So Done (September 29th, the top). 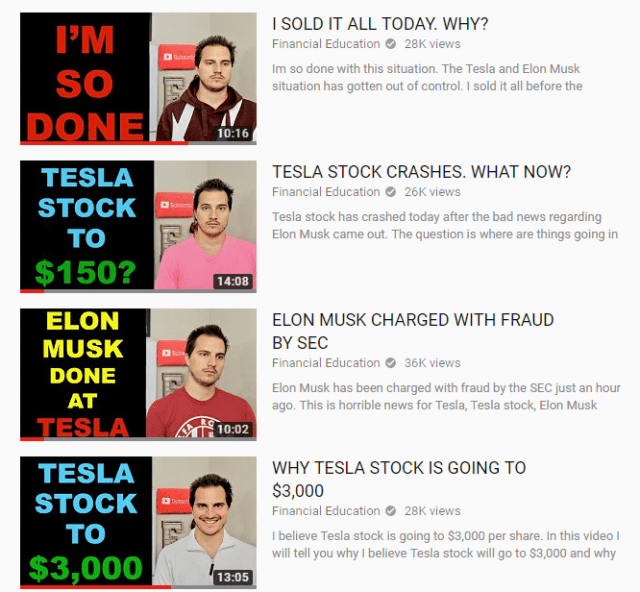 And, seemingly moments after I’m So Done was released, the news came out that Musk had settled with the SEC, and we again get a big happy face and slingshoted to the other side of the emotional continuum:

Some fellow even took the time to plot these facial contortions on an intraday chart……..

I was especially curious how this guy – – who, I’ve got to level with you, doesn’t seem like he just scored a PhD from the London School of Economics – – concluded that Tesla was going to be a $3,000 stock, which would be about a 900% gain. I took the time to watch most of this video, and the rationale provided seems to be:

There’s a lot of other puffery and hypothesizing, but I think I’d respect the guy’s thesis a bit more if he didn’t completely dispatch with it the very next day (and revert back to Tesla is Awesome the day following). Let me put it this way – – this guy keeps dismissing viewer claims that he is “bipolar“, but given my very limited viewing of his work, yeah, I can see why such a label might be suggested by others.

One thing is for sure, he knows how to get subscribers and he knows how to get views. He seems to work hard at it. The videos I watched all began with a declaration along the lines of “Well, it’s past midnight, and I just made this video……...”. He also seems to have a penchant for making video thumbnails with goofy facial expressions. 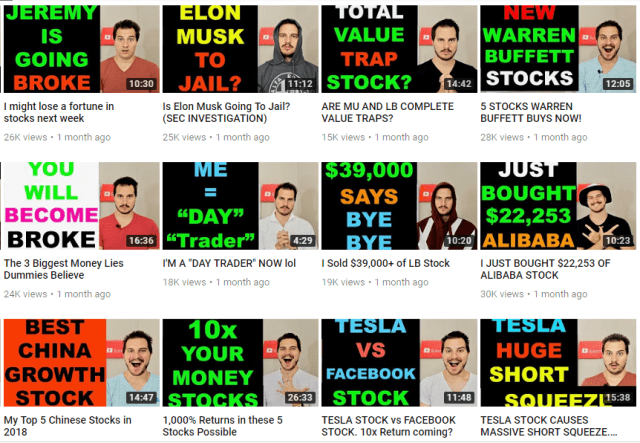 But, goofy as he is, you can’t argue with success. Over 200,000 subscribers is nothing to sneeze at:

Still, I can’t help but wonder if this is the finest financial education that young adults can get. Mr. Financial Education himself mentions he is 28 (when he is reminiscing about how cheap cars were back in HIS youth…….), but by that very fact you can conclude he has never personally experienced a bear market, or even so much as a downtick.

If everyone’s “education” is built on a ceaselessly-fueled fake bull market, what’s going to happen to them when things get weak? Will it be a SNAP-like performance across the board?

SlopeOfHope.com is my principal home, but I’ve got to say, with just over 5,000 subscribers on my own YouTube channel, I feel like a bit of a dolt if some goofball above can garner over 40 times as many subscriptions. I only have one video that has a huge number of hits, approaching 10 million. Want to see what it is? Yeah, I thought so: