Each trading day, our system selects the ten names it estimates will perform best over the next six months. Often, these include large cap stocks with high share prices, but this month we picked up a few small caps. Two of them, Nano Dimension (NNDM) and Ampio Pharmaceuticals (AMPE) were up about 50% as of Tuesday’s close. Here, we show how we found them. Let’s look at our top names from December 17th start.

Our Top Names From December 17th

Here’s how that cohort had performed as of Tuesday’s close.

Our Top Names From December 11th

We saw something similar with Nano Dimension in the top names cohort a week earlier; it was up 47.88% as of Tuesday’s close, outpacing mega cap names on our ranking such as Tesla (TSLA) and Amazon (AMZN).

How We Found AMPE And NNDM

In a nutshell, we select our top ten names based on analysis of their total returns and on options market sentiment. Let’s break that down using NNDM on December 11th as an example.

Here’s a screen capture from our admin panel as of December 11th, summarizing key steps in the analysis that selected our top ten names. Below we’ll explain the 1st row containing NNDM while referring to the columns labeled with red letters. 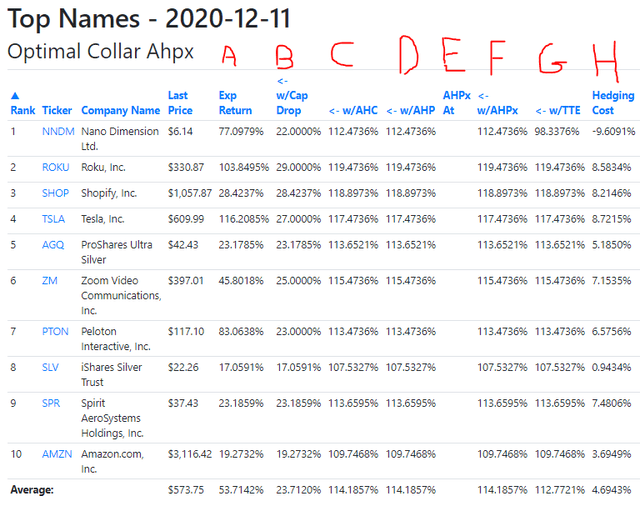 B) “w/Cap Drop” refers to the first gauge of options market sentiment we applied to NNDM. We attempted to hedge it against a >9% decline with an optimal, or least-expensive, collar over the next ~6 months capped at the figure from the last step, ~77.1%. We weren’t able to find a collar using that cap, so we dropped the cap until we found one. The first number at which we found an optimal collar for it appears in the B) column: 22%.

C) The “w/AHC” column refers to the second gauge of options market sentiment we applied to NNDM. Essentially, it’s a gauge of options skew: we scan for another optimal collar against a >9% decline over the next ~6 months, but this time we used a cap of 1% or the current money market yield, whichever was higher (we used 1% in this case). We want the net hedging cost here to be as negative as possible. In NNDM’s case, the net hedging cost was one of the ten most negative in our universe on December 11th. So we increased our potential return estimate for it to ~112.5%, applying a boost equal to the outperformance of names that had scored well on that gauge in the past.

D) The “w/AHP” column refers to the third gauge of options market sentiment: whether the securities could be hedged against a >9% decline with an optimal put. Neither NNDM nor any of the other names could be hedged this way, so none got a boost in this column.

E) The “AHPx at” column refers to the fourth gauge, which is whether the securities could be hedged with optimal puts against declines smaller than 9%. None could in this case (if they could, the smallest number they could be hedged against would have appeared in this column).

F) The “w/AHPx” column is where the boost for names that passed this gauge would have appeared. Since NNDM didn’t pass this gauge, its potential return estimate stayed at ~112.5%.

G) “TTE” refers to “Time To Expiration”. This column doesn’t impact the selection of our top ten names, all of which are based on 6-month performance estimates, but we use it to adjust expected returns in hedged portfolios, when the hedge closest to 6 months out expires in less than 6 months.

H) This column shows hedging cost. Each of these names was hedgeable against declines of 9% or more over the next several months, but notably, Nano Dimension had a negative hedging cost. The same was true of Ampio Pharmaceuticals on December 17th, as you can see in the screen capture below.

Protection Against Being Wrong

For a stock or ETF to appear on our top ten list, it has to be cost-effective to hedge. That was the case with Ampio Pharmaceuticals and Nano Dimension as well at the time they hit our top ten. That offers protection against being wrong. Given its price action on Wednesday, that’s a distinct possibility with Ampio, though investors who hedged it as above were still up double digits.