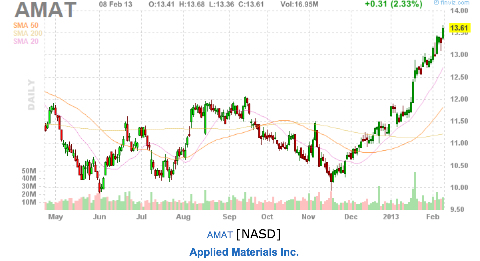 With the company scheduled to release its fiscal 2013 first quarter earnings on Wednesday, investors who have held the stock during its recent run up may be considering adding downside protection to their positions. In this post, we'll look at two ways to hedge against a greater-than-20% drop in AMAT between now and late September.

Why Consider Hedging Against A >20% Drop

A
twenty percent decline threshold is worth considering, because it lowers
the cost of hedging somewhat (all things equal, the larger the
potential loss you are looking to hedge against, the less expensive it
is to hedge), and because a 20% decline is not necessarily an
insurmountable one. To recover from a 20% loss, an investor would need a
25% rebound in his stock. But to recover from, say, a 35% drop, would
require a rebound of nearly 54%

The first way uses
optimal puts*; this way has a cost, but allows uncapped upside. These
are the optimal puts, as of Friday's close, for an investor looking to
hedge 1000 shares of AMAT against a greater-than-20% drop between now
and September 20th: 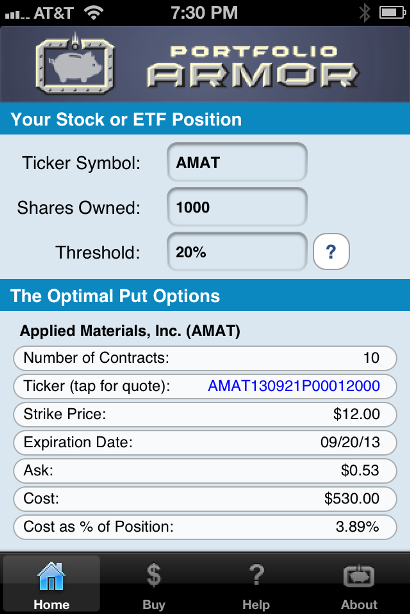 As
you can see in the screen capture above, the cost of those optimal
puts, as a percentage of position, is 3.89%. Note that, to be
conservative, cost here was calculated using the ask price of the
optimal puts; in practice an investor can often buy puts for a lower
price (i.e., some price between the bid and the ask). By way of
comparison, the current cost of hedging the Nasdaq 100-tracking
PowerShares QQQ Trust ETF (QQQ) against the same decline, over the same time frame, is 1.10% of position value.

An AMAT investor interested in hedging against the same, greater-than-20%
decline between now and September 20th, but also willing to cap his potential
upside at 10% over that time frame, could use the optimal collar**
below to hedge instead.

As
you can see at the bottom of the screen capture above, the net cost of
this optimal collar is negative — meaning the AMAT investor would be
getting paid to hedge in this case.