[edit] Please see a new post with more perspective on a would-be ‘inflation trade’ and its limitations.

The following excerpt is the opening segment from this week’s edition of Notes From the Rabbit Hole, NFTRH 398…

This week’s opening paragraph: If we are going to highlight eroding fundamentals, which we did as gold under performed commodities and stock markets and Semi Equipment made an early positive economic indication, then we also have to highlight and respect improving fundamentals; no ifs, ands or buts.

Gold is about the economy, the market risk profile, implied confidence in policy makers and above all, the state of money and the perceptions of billions of people who hold this ‘money’ issued by governments with “Legal Tender” or other wording to give the holder a feeling of confidence in its origin, its backing.

On this last point, the only piece of paper in my wallet right now says “Federal Reserve Note” right above Lincoln’s head and has a ‘Federal Reserve System’ insignia next to his right ear. On the back it tells me that we trust in God but I don’t want to bring any deities into this. I want to know that I can trust the Fed, but I am a gold bug so you know the answer to that one. I not only don’t trust the Fed, I fear the Fed as an abuser of the people’s Federal Reserve Notes. This institution prints debt-backed paper and puts it in my hand, sending me forth with implied confidence, but feeling like a dupe in really having no other choice but to be a long-term gold bug… as well as a paper holding dupe. 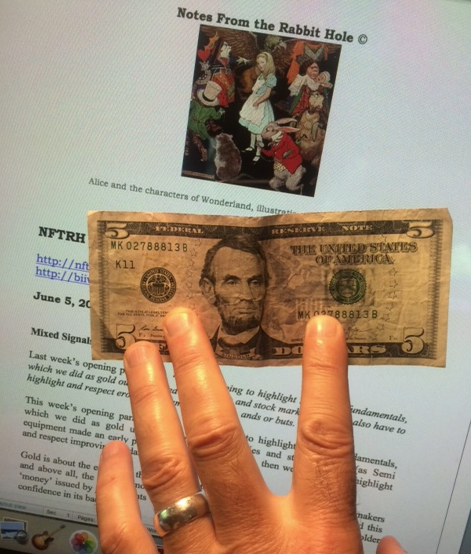 Now let’s dial back the Gold Buggery and note the other aspects of gold’s utility. We have followed a gradual decline in confidence by the masses toward the Fed. This was reflected in gold’s ratios to the broad stock market and US Treasury bonds, among other things. Confidence topped (gold vs. these items bottomed) in January and a cycle change was on.

Then recently these ratios took a hit as did other aspects of gold’s fundamental backdrop, like its ratios to commodities (especially oil) and as noted over the last 2 weeks, the resurgence in the Semiconductor Equipment segment, which would indicate economic firming (including employment improvement) down the road. Our thesis being that this need not hurt gold but that it would take the ‘economic contraction’ fundamental off the table in favor of the ‘inflationary growth’ funda, Greenspan 2003-2007 style.

So here we are, with one positive, though forward-looking and beneath the surface economic signal (Semi sector) and one backward-looking and readily observable by the multitudes in the man/machine complex (Payrolls).

The thing is though, that as noted in a post on Friday, the seeds of an ‘inflation trade’ are sown by a Fed that would remain dovish for too long, while the mechanics of cost push inflation keep whirring along.

As for the thing that most people consider ‘inflation’, prices, let’s look deeper into the ISM manufacturing report for May. The headline showed growth in the sector, which is not surprising given the US dollar’s extended weakness. But it also showed a trend in prices paid by manufacturers for the materials and commodities used in their processes.

The ISM® Prices Index registered 63.5 percent in May, which is an increase of 4.5 percentage points when compared to the 59 percent reported for April, indicating an increase in raw materials for the third consecutive month. In May, 34 percent of respondents reported paying higher prices, 7 percent reported paying lower prices, and 59 percent of supply executives reported paying the same prices as in April. A Prices Index above 52.4 percent, over time, is generally consistent with an increase in the Bureau of Labor Statistics (BLS) Producer Price Index for Intermediate Materials.

The analysis should stay on the inflationary path because the forward looker (Semi Equipment) is ramping up and the backward looker (Non-farm Payrolls) has put the multitudes back on economic contraction alert, possibly putting the Fed back in its box, at least temporarily.

This comes against a backdrop of rising prices, which has now become a trend from the February lows just as it has in stock markets and commodities… all of which followed the leader, gold, which bottomed and turned up first to start the new year.

Let’s get on to this week’s work and update the fundamental knee jerk back in gold’s favor, not so ironically amid a counter-cyclical indication (poor Payrolls).

There is a situation in play that is so simple it may appear confusing if one does not correctly interpret the difference between early indicator assets (like gold) and market signals (like Semi Equipment) and the laggards like the back-looking Payrolls data. It’s not to say we have a crystal ball, but there is a logical path toward a Greenspanesque inflation phase in play.