Italy’s FTSE MIB Index still remains more than 60% below its record high reached pre-2007 financial crisis, as shown on the monthly chart below.

It’s facing major overhead resistance with the convergence of a triple top price formation, 40% Fibonacci retracement level, and the lower edge of its original uptrending channel around 24,568, which is still a long way above its current price, but which may act as a depressant and contribute to volatile swings until it eventually retests that level and either breaks and holds above, or is rejected. 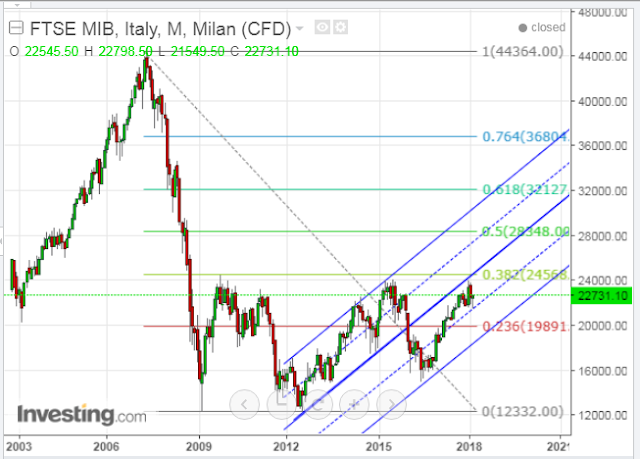 END_OF_DOCUMENT_TOKEN_TO_BE_REPLACED

On the video today the first bit where I was looking at the action so far as a likely bull flag that should deliver a retest of the HOD is now obviously out of date, as the flag then broke up and made target, and we have a new HOD. That was unfortunately only of use to subscribers watching the video being recorded live, or on the subscriber twitter feed where I posted the full version soon afterwards. The shorter version takes a bit longer to produce.

For the rest of the video I am considering the case for a possible high being made here in the 2737.25 to 2741 area on ES and we are in that inflection point now. If we see a hard fail here we are looking for new 2018 lows at minimum. If we see a break up instead then we should see ES reach the 2780s next. Intraday Video from theartofchart.net – Update on ES, NQ and TF:

END_OF_DOCUMENT_TOKEN_TO_BE_REPLACED The triple-bullish real estate fund symbol DRN has had its share of volatility the past couple of years. To my eyes, real estate has been one sector clearly entering a bear market. The big question at this point is whether the consolidation we’ve been in the past few weeks is preceding a recovery bounce or a new leg down.