Does anybody still think that there is no market manipulation? As usual, volume was almost non-existent and well below average.

Given that we are being set up nicely, where the retail is encouraged to buy buy buy by various talking heads of CNBC and other MSM, this itself should raise the red flag that there is cliff ahead.

Everything is screaming for a reversal but the money flowing in from Europe is keeping the US stock markets alive. Some of the reversal patterns are so rare that they happen once in a while and yet we are hanging on. Can the market defy gravity forever?  Unless there is more free money infused by the Feb, it cannot. So may be one more day we will have to bear the agony. In the mean time, gold down, silver down, oil down, copper down and equities barely moved!

END_OF_DOCUMENT_TOKEN_TO_BE_REPLACED

As I'm writing this post, AAPL has broken out to make an all-time high of 468.95 in after-hours trading after releasing their latest earnings report. I last wrote about AAPL on January 9th and mentioned a couple of possible scenarios. One was a pullback to re-test November lows, and the other was a run-up by market makers into earnings.

The Daily chart below shows where tonight's price was hit…above the +2 deviation level of the upward-trending regression channel which began at the June 2010 lows. When tomorrow's candle opens, it may re-test tonight's high before dropping. Near-term support would sit, firstly, at the +1 deviation level around 440, followed by this month's Volume Profile POC (yellow horizontal line) at 422.32…the next level would lie at the channel "mean" (currently at 412.35), and, subsequently, at the 50 sma (red) at 397.15.

As I mentioned in my previous post, AAPL has, so far, been unable to remain above its +1 deviation level of this channel…we'll see whether the same applies over the next days/weeks ahead, or whether it's "different this time"…with 500.00 within reach, who knows! 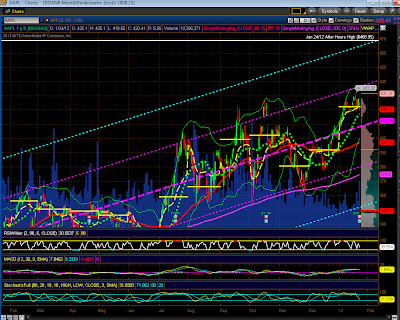 Well, the bearish case seems to be getting weaker by the day. The blowout earnings report by Apple (which, let's face it, isn't much of a shock) is almost certainly going to mega-goose the market tomorrow, and only God knows what Bernanke is going to say or do to propel things further. I am seeing more and more of this kind of story hitting home pages:

I have remained mostly in cash this month, and I'm currently long DRN and JNK as hedges. Everything else is little short positions.

I offer the charts below without further commentary. They simply illustrate what I consider thresholds of various indexes which, if crossed, each represent another nail in the bears' coffin. Maybe they'll be reached; maybe they won't. In any event, they merit observation.

END_OF_DOCUMENT_TOKEN_TO_BE_REPLACED

Well, Apple (AAPL) – – which, like GOOG, I pretty much never trade – – blew the doors off again. It's trading about $35 higher than its close price and has slapped about 26 points onto the /NQ as of this writing.

The company is nothing short of amazing. Pretty incredible what consistently fabulous products and a well-managed organization can do for a stock price, isn't it?

END_OF_DOCUMENT_TOKEN_TO_BE_REPLACED

I'm starting to think I should just stop bothering with anything else but GDX. This is like the new UNG – – it faithfully pushes lower, irrespective of the manipulations of TPTB. Thank you, GDX.

Below the (completely manipulated) SPY is in blue while GDX is in black. It looks like they decoupled a couple of weeks ago.