The support and resistance levels for the Major Indices noted in my post on January 10th still apply.

In that post, I also made reference to a 10-Day 30-Minute chartgrid of the YM, ES, NQ & TF and said that any repeated attempts to advance convincingly beyond the highs of the first week in January would need to be accompanied by higher volumes. The horizontal white line on the updated chartgrid below represents that week's high. We can see that: 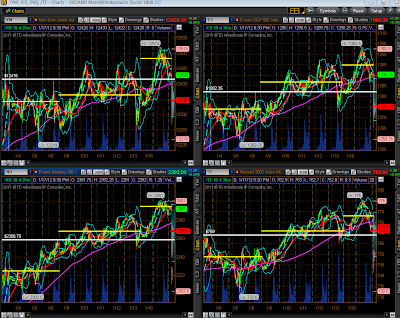 END_OF_DOCUMENT_TOKEN_TO_BE_REPLACED

It has indeed been rather frustrating as a short-term bear since the gap open on 1/3. But, oftentimes when you are a contrarian and you make your livelihood on fading short to intermediate-term market extremes you often get into positions early. Any professional with any cred will tell you the same. It is to be expected. However, we are now nearing the area of max pain. While I thought we would see an immediate push lower after the first week of the year, I was willing to accept a push up to 1300 on the S&P or roughly $130.00 in SPY. We hit that level today and after the bulls pushed and pushed they failed miserably by the end of the day.

END_OF_DOCUMENT_TOKEN_TO_BE_REPLACED

Squeeze … as I have mentioned in the past, squeezes are better if you can push the market lower first.  Was Friday's gap lower that move?  Was it big enough to really set-up a strong enough squeeze, or is this move going to fizzle out quickly?

Read on to see what I think …

END_OF_DOCUMENT_TOKEN_TO_BE_REPLACED

My good Parisian friend Serge just sent me an interesting illustraton of financial fund XLF and its RSI.