Further to my post of January 28th, which focused on Weekly charts, I'll take a closer look at near-term support and resistance levels on the shorter Daily timeframe for YM, ES, NQ & TF, as shown on the charts below.

Price on YM is currently trading in between its upper Bollinger Band and middle Bollinger Band, above both POCs, and above both moving averages (which are in a bullish Golden Cross formation). Using these parameters, I'd put near-term resistance at 12761, and support at, first, 12499, then 12377, and, finally, 12195 (one-year POC). 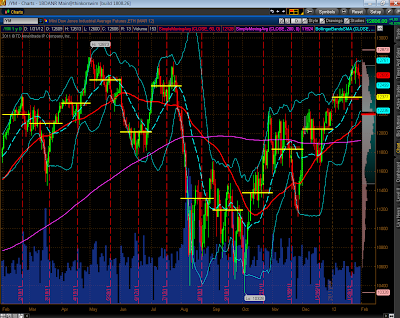 END_OF_DOCUMENT_TOKEN_TO_BE_REPLACED

I wrote on Friday that it was the calm before the storm. But given the size and nature of the overextended / overbought market, the sell-off has not been that severe, at least not yet.

Greece will default no matter what. Question is when. One report is saying that it will happen in the early March. (http://www.examiner.com/international-trade-in-national/greece-plans-orderly-exit-of-the-eurozone ) But I think early April is more likely. Germany is tired of handing out money to Greece and they are only buying time. Question remains of contagion. Have LTRO been able to provide a cushion to the European banks from the coming shock? Next in line is Portugal and Spain. But short term trading in Wall St. is devoid of fundamentals. It is all about set up. So today SPX gaped down in the open but reduced the gap at the close. It was all about squeeze the short and keeping the bulls interested. If you look at the variances between Euro/USD, AUD/USD and GBP/USD, you will see that it is more of short squeeze than a rally.

END_OF_DOCUMENT_TOKEN_TO_BE_REPLACED

I had an interesting discussion with a friend the other day when he asked me if I spent anytime on Facebook.  I answered that I didn't "do" Facebook since I was too busy.  (There are a host of other reasons of course, but that's another topic).

I asked him why he Facebooked and he suggested that he did it to keep in touch with people and to network a bit.  I told him that I had read an article recently that had stated that research is beginning to show that Facebook makes people depressed.  To my surprise, he totally agreed.
FACEBOOK LEADS TO DEPRESSION

END_OF_DOCUMENT_TOKEN_TO_BE_REPLACED

What would you buy now?

Seriously?  Is that a question that we, as self-directed investors should have to answer. Yet the question is asked everyday in almost every financial media outlet. And most of the answers lack depth and sound reason. Moreover, the probability of choosing a successful stock is always 50/50. Why do you think monkeys throwing darts at the WSJ stock section performed almost as well as the professionals. Remember, it's a game that is controlled by marketing. Think about it. The message is so powerful on the major media outlets that they, the media, actually make you think the financial professionals that grace their airwaves and their respective companies can outperform the market. Yet, look at the facts