I was asked yesterday why I'm thinking the 1440 SPX area might well be a major high rather than a retracement on the road to test the 2007 highs. From a TA perspective both are definitely valid options, and I would go so far as to say that in all likelihood we will do one or the other. I covered both options in my weekend post before last and you can see that post here.

There are a few technical reasons why I'm leaning towards thinking this is a major double-top being formed and they are as follows:

1. There are major topping patterns formed and very much still in play on copper, EEM and many other indices. These need to be borne in mind and make downside risk here unusually high.
2. SPX highs tend to be at tests of important previous support or resistance levels, and the April 2012 high wasn't. This has me thinking that the April high was part of a topping pattern rather than a significant interim high in its own right.
3. The huge Dow Theory divergence between Dow and TRAN here is characteristic of major tops.
4. There is a very nice setup of negative RSI divergence on the weekly chart, and there is also a decent resistance trendline that is a few points above the 1440 area SPX pivot

You can see the trendline I'm talking about in the 1450 area on the SPX 10 year chart below: 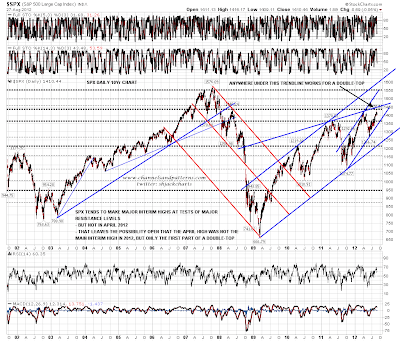 In the short term SPX is failing at the retest of the rising support trendline that was broken last week. SPX has been crawling up the underside of that trendline and will need to either break back up or turn back down soon. If it turns back down I would see a break below last week's low as a signal that rising channel support from the June low will most likely be tested. That's now in the 1375 SPX area. Worth noting on the chart above is that rising support from October is now in the 1335 area, and on a break below 1375 that would be the next trendline target: 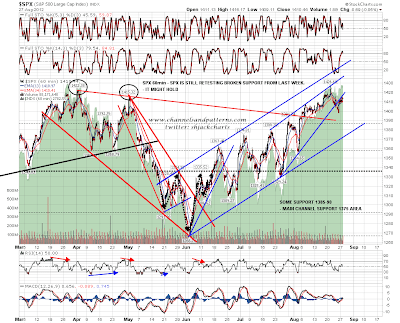 ES looks weak overnight but might well have a bullish following wind for a move up from both EURUSD and TLT today. On EURUSD I was wondering yesterday morning whether declining resistance from the high might break up. It held yesterday but has broken up overnight. I'm thinking that the valley low for a double or M top has been established and the obvious upside targets are 1.259 for a retest of the highs and 1.261 for a retest of wedge resistance. Both options would be valid for a topping pattern, and on a subsequent break below 1.2465 I'd expect wedge support to be broken, as the target would be well below that wedge support:

TLT has filled the first gap I showed the other day and the 60min RSI suggests that it is topping out short term. I'm expecting a retracement to retest the 123.5 to 124 area and a reversal there would establish a decent support trendline for the current upswing: 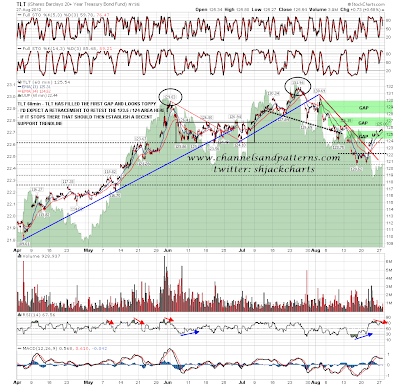 Oil spiked down a couple of hours after I posted the very bearish looking chart on that yesterday morning. It has since been retracing but unless short term declining resistance breaks I'm expecting a test of rising wedge support in the 93.9 to 94 area soon:

Unless last week's low is broken I'm expecting some upside today. EURUSD and TLT look supportive of that so far. ES looks very weak though and I have a short term M top target at 1400-1402 ES still in play from yesterday morning. A break below 1400 would look bearish. If we then get a break below last week's low at 1395.25 ES then we're most likely going to see continuation lower towards my 1375 SPX trendline target.
Mark This Post as a Favorite