I had the best week of the year for me, percentage wise, yet left so much on the table running scared. This week will be just as much of a nail biter.  Wednesday, the German court rules.  At first I thought that this clearly violates their constitution, but recent rulings from our courts, and the total disregard for the rule of law in other matters relating to the bankers, has me thinking all systems go.  On Thursday Ben speaks, with the recent run up in the market, should be a sell the news event, but as my trading partner pointed out to me, they may already be doing QE3, and just decided to not tell us.

For me, risk management demands I continue to move up stops and scale down my size, and on Tuesday I will initiate some hedging.

For those who subscribe to me, I am going to add BOIL, which is a leveraged Natural Gas ETF to my focus list.  Nat Gas has bottomed, and I want to buy the dips and ride the moves with some leverage.

Below are some charts and my portfolio and performance. 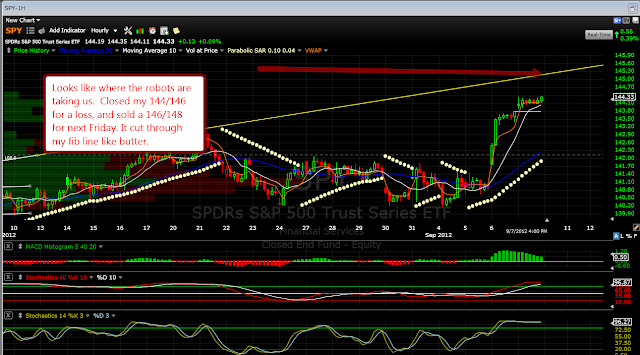 Well, my fellow Slope-a-Dopes, here we are precariously perched like racecar red cardinals contently chirping away on towering tree tops. Will we boldly soar to new heights into the red, white & blue yonder, emulating the magnificent majestic bald eagles we once were?  Is American exceptionalism going to unfold its fantastic feathers in all their spectacular splendor, like a proud peacock strutting its stuff down the captivating catwalk?  No way…..no how, you dubious demented dodo birds!  Look up at the sick sinister sky silly! What you are seeing is a gaggle of grey geese heading south for the Winter.  Brace yourselves for an awful Autumn, as the black swan is about to make her long awaited rabid grim reaper reappearance. The only question that remains is which rotten bastard big bird egg will she be hatched out of?  Let us examine the sulfur smelling stench of one such possibility:

END_OF_DOCUMENT_TOKEN_TO_BE_REPLACED

I woke up this morning – as I almost always do – at an obscenely early hour and staring at the ceiling, contemplating life and its purpose (I have a lot of time for such things). I actually fleshed out a fairly comprehensive view which was so completely dark, I felt it wasn't worth sharing. I guessed, though, that it was something akin to nihilism – a term I'd heard often but never explored – and, sure enough, my ruminations have already been well-defined here.

Existential nihilism seems closest to what I believe, although I would tack on one other thing: the only thing you can do to add "meaning" to life is to either reduce suffering or prevent suffering.

There are many who believe life's purpose is to glorify God. Good heavens, what a load of crap. The supreme being I contemplate isn't burdened with such pathetic insecurities. Others believe a life well-led will lead to immortality. Again, God in heaven, spare me from such a thing. Most people don't know what to do with a rainy Sunday afternoon; do these nit-wits really yearn for a never-ending existence? I think they got Grace mixed up with Hell.

Oh, wait. You wanted to try to figure out how to make money using charts or something. I forgot. Let me turn back to that.

It goes without saying that the annoying, nettlesome, cursed topic of QE3 is going to reach fever-pitch this week, as we crawl our way to Thursday's big event. I hope Bernanke DOES pull out his bazooka and get it over with, but I'll go out on a limb (again) and predict he does this: Dick. He has one bullet left, and he knows once it's shot, it's shot. If he launched more "accomodation", I think it would give the market one quick, final spurt and then send it spiraling down.

I think what'll happen instead is that he'll announce nothing, the market will briefly drop in "disappointment", and then – completely inexplicably – rally. That's sort of the worst of all worlds, since it'll prove once again that the THREAT of QE3 is more powerful than the DEPLOYMENT of it.

Just look at the chart below. QE1 is tinted yellow. Huge move. QE2 is in green. Medium-sized move. Operation Twist is in cyan. Smaller medium-sized move. OT Extension is in magenta. Smaller move still. The potency is declining. QE3 would be an even punier move and, possibly, perversely, could actually REVERSE the market. Then Ben would be fucked beyond imagination.

As for a target, it's tough to say, although the first line in the sand I'm watching is the wedge that's forming on the S&P. The price point is close.

I am very, very lightly committed to this "market" – a mere 28% in short positions, and the rest in cash. I won't be comfortable until Beard-face is done.

Oh. Have a nice day.