Editor's Note: BDI usually offers up his Evil Plans on Sunday, but given the extraordinary events happening in Spain, he has produced a bonus post today. Please note some of the images are disturbing, which is why I am deliberately putting a page break here in case you would rather not see them. Also, in case you missed it earlier, please note the new video post I did after Tuesday's close – Tim

END_OF_DOCUMENT_TOKEN_TO_BE_REPLACED

As mentioned countless times recently, the analog with IYR (the wedge) has finally completed.

Data released Monday night shows that China's CB
Leading Index spiked up to its highest reading in two years, as shown
on the graph below. "This index is designed to predict the direction of the
economy." It's a "combined reading of six economic indicators related to total
loans issued, raw material supplies index, new orders, consumer expectations,
export orders, and housing." 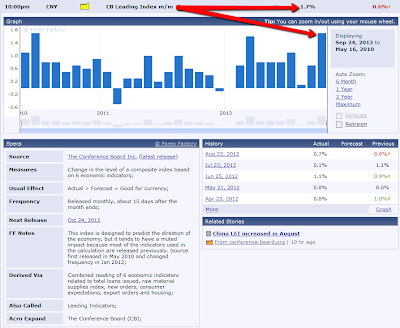 As I outlined in my post of September 20th, the Shanghai Index
tells a different story as it trades at three-year lows and threatens to fall
off a cliff, but China's Financials Sector has been trading in
an opposite direction.

The question is, "Do we believe that the data is
actually reflective of China's economy, or is its Index?"

The
Shanghai Index has trended in diametric opposition to the
S&P 500 Index over the past three years. Which one
accurately reflects its country's economy, if either?

No wonder people
are confused and are in the dark as to the real fundamentals of both the economy
and the companies listed in the stock exchanges (and their actual values)!
Hence, they are reluctant to commit any excess cash to the markets, particularly, it
would seem, in China.