The 30 min chart below of the TF (Russell 2000 E-mini Futures
Index) contains a Fibonacci retracement and a Fibonacci fanline drawing. You can
see the levels at which buyers have been chipping away at the
TF since it rallied last Thursday as price has subsequently
dipped on three occasions…853.50, 851.50, and 850.00.

As of today's
(Tuesday's) close, the price has bounced back up, once more, and sits just above
near-term support at 853.50 (confluence of the 40% Fibonacci retracement level
with the 60% Fibonacci fanline, together with the merging 50 and 200 MAs). A
break and hold below this level, and particularly 850.00, may signal that a
deeper dip is on the way to, potentially, the levels as noted in my post of September 14th for the corresponding
Russell 2000 Index. Otherwise, I'd be looking for the rally to
resume on a hold above this level. Longer-term upside price projections for the
TF are described in my last post. 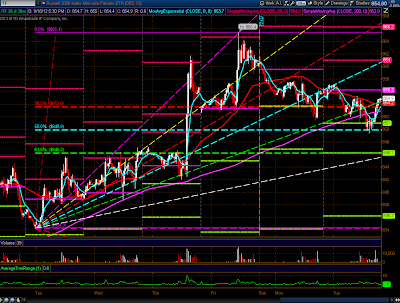 As a follow-up post to the one I did last week on How Big Should I Trade, I want to focus on "When I Should Not Be Trading". This is a little bit more straight forward that will focus on the more subtle traits for when you know you should just 'hang it up."

First and foremost, across the board – the main characteristic involved in every case a person shouldn't be trading is when it is done out of desperation.

Desperation is what lures so many people into the stock market – much like the flashing lights of Vegas that offers the promise of a better life as well. In both cases it just leaves people further in despair and a lighter pocket too.

Often times the position sizes that we choose to trade is often a direct result of what we'd like to  make from the market on a regular basis. Some people won't trade $1,000 or $2,000 in a single trade because they just don't feel like it offers enough in returns.

Some folks will trade larger sizes because they figure that if they can make $X.XX doing so, that will enable them to quit their day-job.

And then of course, there's the person that 'desperately wants to be a millionaire' and as a result creates a nifty spread sheet that calculates "If I trade "X" dollars and make "Y" return, over the course of "Z" years, I will be able to retire.

But let me be frank – Trading is about developing a craft, a skill set, a TRADE that will allow you to consistently extract income out of the market outside of all external forces, opinions, people, and influences. Trading is not about making money and winning. That is the result of developing your skill set.

You create the skill set and the ability to trade with discipline and accuracy, then winning will be an afterthought.

But by trading out of desperation, it causes you to take short-cuts and circumvent the path to developing a long-term career in trading. It will cause you to trade larger than you should, more frequently than you should, and more often with out any reason for doing so.

So learn to trade smaller dollars, amounts that you can withstand to lose. Amounts that if the trade goes horribly wrong, you won't be dreading telling your spouse about what happened.

That also means avoiding the all-too-alluring Proprietary Trading Firms – better known as "Prop Firms" – if you take this route, I can assure you that you will not blossom into the trader you are capable of becoming.

Because it is just another short-cut – and there are no short-cuts to trading successfully – the only thing that a prop firm makes you believe you can do is earn a greater amount of money by trading in bigger sums of cash that doesn't even belong to you, the likes of which you would never trade, simply because you wouldn't be joining the prop firm in the first place if you had that kind of cash.

If you want to be a trader and be good at it. Don't take the short-cuts. Every other profession penalizes people for trying to take the short cut to success and if you do what I'm telling you not to do… well, then you are writing your own trading obituary as a result.

Learning to become a successful trader with large positions, requires that first prove yourself successful with the smaller positions.

It’s All out the Window Now

In the run up to last Thursday’s FOMC announcement of open ended ‘asset’
(mortgage debt) purchases, ZIRP extension and Twist continuation, NFTRH
had been using the average US presidential election cycle, sentiment
backdrop and of course technical analysis to stay bullish (with
associated rising risk profile).  We had incorrectly minimized the
potential for QE right here and now in the interest of not running with
an increasingly over bullish herd and with respect to risk management.

Well, that is all out the window now because the US has apparently
conspired with Europe to jointly enter the currency depreciation
sweepstakes with the US springing out of the gate to a healthy lead.
Sentiment is becoming dangerous, speculation is breaking out and
liquidity warning indicators like the Gold-Silver ratio, US dollar, US
Treasury Bonds, TED Spread and LIBOR have all been dispatched on a
southward journey in the interest of greed, speculation… and
desperation.  This is the moment of maximum hubris by Ben Bernanke and
powerful policy makers the developed world over.

END_OF_DOCUMENT_TOKEN_TO_BE_REPLACED

I just have to put this out there, since it just happened, and I think it's worth sharing.

Years and years ago, I worked for one of the famed "Market Wizards" at Technical Tools, a data company. I remember clear once that he was waiting for a trade, and after many, many days of watching for his "signal", he realized that his data wasn't updating. I thought it was rather comic, but I've come to repeat the same thing just now, albeit in a smaller way.

We've all grown so accustomed to Fed intervention putting markets in a "deep freeze", that it took me about four hours to realize my ES and NQ screens weren't updating. This is pathetic, since I am typically "in tune" with every tick of the markets. My portfolio's profit was inching up nicely all morning, and I kept patting myself on the back, because every time I glanced at the e-mini charts, they were up rather sharply (and I am, as you might guess, totally short).

I finally bothered checking the time stamp, and it was from 5:50 this morning. Soooo…….

Anyway, kind of embarassing (and a bit shocking to me; I must be aging faster than I imagined), but it just goes to show you shouldn't laugh at someone, because the same thing might happen to you later in life.