Very rarely do I take a
directional stand on the market.  In
today’s environment it seems like yesterday’s profit turns into tomorrow’s loss
more often than not.  Then there are days
like today that scream, “if you’re ever going to be a contrarian trader, now is
the time to do it.”  Multiyear
highs!  Gold!  Hope for August jobs!  Cue the financial media mania:

END_OF_DOCUMENT_TOKEN_TO_BE_REPLACED

The Year-to-date Daily chart below shows the percentages gained
in 2012 for the S&P 500 Index, the Emerging Markets ETF
(EEM), the Commodities ETF (DBC), and the
Agricultural ETF (DBA). 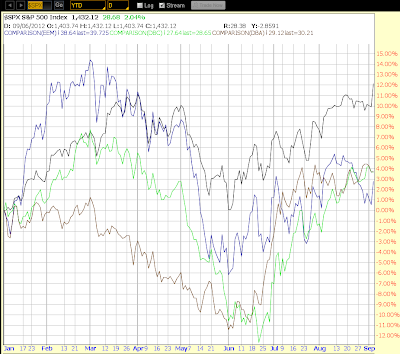 END_OF_DOCUMENT_TOKEN_TO_BE_REPLACED

As I figure, I probably have about a 60% chance that this trade isn’t going to work out. So why the heck would I even make this trade to begin with?

Because of the risk/reward that goes with making this trade.

You see, YELP has seen a surge of buying interest in recent days, going from the $17’s all the way into the $26’s.

Today you have a huge market rally and YELP is down over 3% on the day.

So my strategy is as follows:

– Wait for an ideal risk scenario where either the stock has to bounce, or I get quickly stopped out.

– Make the stop-loss where if the trade doesn’t work out, the minimum I lose is 4:1 to what I could’ve have made.

– Because YELP is so volatile and a high-beta stock – this is very possible.

Now let’s put it into practice.

– Bought YELP off of its 6-day upward trend-line (support)

– Bought near the previous lows of the day so that if it breaks those lows, I know immediately the stock is making a new leg down and that it is time to get out.

– That means that this type of trade setup only  needs to work once out of four attempts for me to still make a profit off of it. That’s why with a likelihood of a 60% fail possibility, it is a risk i’m willing to take.

And here’s the trade setup. Red = Stop, Blue = Entry and Green = Target as I described above. Be sure to check out Ryan’s Blog at SharePlanner.com