The 1st meaningful economic data after Helicopter
Ben announced QEinfinity  was the Empire Manufacturing
index, and it was a disaster.  It was at its lowest level since 2009,
dropping to a minus 10.4 reading. No wonder Ben sees something which we don’t
and he is very afraid.

At the same time, it is like a mad professor unwilling
to accept that what he is doing is not working. In his mind, QE must work even
if by "work" he means risk assets going up along with commodities. And I think
the 4th quarter GDP reading will come at 1% or below.  ECRI is defending its call that USA is
already in recession.

From Dshort.com: Early
last week, ECRI notified clients that the U.S. economy is indeed tipping into a
new recession. And there's nothing that policy makers can do to head it off.

ECRI's recession call isn't based on just one or two leading indexes, but on
dozens of specialized leading indexes, including the U.S. Long Leading Index,
which was the first to turn down — before the Arab Spring and Japanese
earthquake — to be followed by downturns in the Weekly Leading Index and other
shorter-leading indexes. In fact, the most reliable forward-looking indicators
are now collectively behaving as they did on the cusp of full-blown recessions,
not "soft landings."

And yet we expect the stock market to reach somewhere near
1600 in SPX. It’s so eerily similar to 2007-2008. On one hand I see the market
price action following the Presidential cycle pattern. The following chart is
from Bespoke:

On the other hand I see that OEXA200R is at the top of the
range and historically there is not much room to run higher.

And then there is so much liquidity in the market ,at least
$85 billion a month from here till Nov.

So which way folks? We know economy is tanking but we also
know that liquidity trumps at least in short term.

In situations like this I turn to my cycles and crystal ball
for direction and they are saying that we most likely will follow the
Presidential cycle. Which means we will possibly find a correction by end of
September and a final push to new highs by the election?  2013-2014 will definitely be nasty unless the
Fiscal Cliff thing has been worked out by then. But given the deep political
divide between the two parties, any compromise looks very unlikely. Just look
at the following secret video of Romney.

May be he is telling the truth but telling truth is never a
strong quality of a politician. That’s why Obama was so successful in the 1st
place. His occupational training had prepared him to avoid truth in any kind or
form. But what do I know of politics and my ill advised head butting in politics
is of no use in finding what the stock market will do.

We had a little bit of a correction today some of which was covered in the last few minutes. I think this week we will see the markets
going back and forth and a test of the high by Friday, the triple witching day.
If the market fails to make a new high by then, most likely we will see a 5%-7%
correction which will be a buying opportunity.

Lets see how things work out.

Thanks for sharing my thoughts and reading World of Finance.
Join me in twitter (@BBFinanceblog) and share with your friends.

So far today I've made two new long trades on the day – the first one in Green Mountain Coffee Roasters (GMCR) at $31.74 and the second in GT Advanced Technologies (GTAT) at $6.73 - so far I'm getting the feeling of being duped on my timing on the entry in conjunction with the market.

But as is always the case with trading, things can change around very quickly and the key is to remain disciplined and follow the stops that I have in place.

But technically both stocks look great, it's just that based on where I got in at.

If one isn't careful, it can completely change the look and feel of the trade and cloud one's judgement on how to manage it.

With that said, I'm going to keep the GTAT setup as my long setup of the day, because if it can re-break that 6.71 level, we could see it breakout like I originaly expected it to do. This analog of the real estate ETF symbol IYR is looking promising, although I'm not doing anything about it yet. The upper chart is from last year; the lower chart is the present condition. We haven't broken the wedge yet, but if we do, I would expect similar downside action.

The following Weekly charts below depict support and resistance
levels for the U.S. $, 30-year Bonds, Gold, Oil, Copper, and
Silver.

The U.S. $ is at a minor support level (major support is
further below at 78.00), 30-year Bonds are at a major support level and have
broken below their "diamond" pattern that has been forming, Gold is approaching
major resistance, and Oil, Copper and Silver have reached fairly major
resistance. If we see a breach of major support and sell-off in the U.S.
$ and Bonds, then we should see Gold, Oil, Copper, and Silver blow through their
respective resistance levels…ones to watch to see if recent downside
and upside momentum continues, pauses, or reverses in the next few days
ahead. 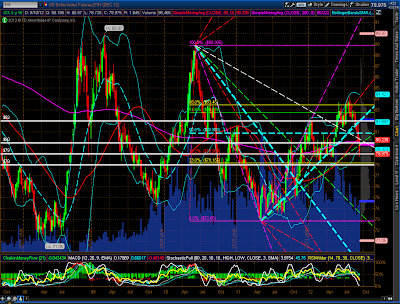 END_OF_DOCUMENT_TOKEN_TO_BE_REPLACED

Don't worry; the topic of this post isn't nearly as terrifying as the subject. It pertains merely to this short: