I'm sure I could be forgiven for not falling all over myself to put together a post tonight. It's been a rough week – – pretty much everything the bulls could have asked for was delivered on a shiny silver platter over the past couple of weeks. The ECB pledged infinite bond buying. The German Court gave a big thumbs-up to the bailout. Bernanke likewise pledged infinite bond buying at a new pace of $85 billion every single month. We live in unprecedented times.

Some indexes are at levels never before seen in human history. It is truly like the financial crisis and the so-called Great Recession never happened. Central Bank printing has erased them from history.

The NASDAQ is at a level not seen in a dozen years, although it won't be long before it nails its trendline of resistance (although these don't exactly act like iron walls these days).

The Dow – astonishingly – is within spitting distance of its October 2007 high. Mind-boggling, is it not?

The small-cap-based Russell 2000 tagged its lifetime high today; even a strong puff of air Monday will send this index to lifetime highs.

Although gold and silver had an amazing week to the upside (which caps an amazing several months), I do note with interest that a very powerful Fibonacci retracement has come into play. I wouldn't be surprised to see precious metals weakness next week.

Lastly, just about the honest-to-God, holy-crap-it's-going-to-plunge chart left is the bonds. This is a massive head and shoulders pattern.

As for myself, since I'd rather not have a $0 account balance, I remain conservatively positioned, with two-thirds in cash and one-third in a variety of small shorts (I goosed this up from 25% at the opening). We truly seem to live in a QE-infinity world now, and until such time as, for whatever reason, it's evident that QE simply won't work anymore, this is our New Normal.

Like it or not, human will – and a hell of a lot of financial
chicanery – has created this bull market.  Powerful people, not duly
elected but rather appointed, are continuing to degrade the peoples’
money in the interest of keeping the system moving forward.

Here is the S&P 500 shown establishing a new technical objective
(hey, it’s TA and it does not care about right and wrong) after hitting
our long-standing target of 1460.  I had no clue why SPX was targeting
1460 other than the election cycle that NFTRH followed all summer.  But
now I (and you) have a clue, thanks to the DML (Dear Monetary Leader)
following up his Jawbone with action – very inflationary action.

When the inevitable politics of the ever-increasing divide between
the have’s and the used-to-have’s crop up people should remember the
massive and open ended asset bailout that was just kicked in.  Here I
have got to tip the hat to papa Gold Bug Jim Sinclair who, for all the
misery he takes was right on with his ongoing ‘QE to infinity’ mantra.
This is the mechanics of why some are enriched and some are
disenfranchised.

The only time I have a problem with the ‘QE to infinity’ stuff by the
way is when it causes people to hang on during those extended phases
when deflation is the greater threat.  You know, the times like over the
last year when the inflation gun was being reloaded?

It appears that Mitt Romney spit in the eye of the monetary gods when
he tried to politicize the Fed and announced Bernanke’s probable ouster
by a would-be Romney administration.  The Fed showed him a thing or two
about politics, didn’t it?

Imagine the S&P 500 in a strong cyclical bull market, the economy
lukewarm but not in crisis (on the surface, anyway) and still the Fed
goes open ended and all in.  This is precedent setting and this could
well be the last play of the current system because if a massive asset
bubble results from this there will probably be no coming back from the
eventual crash.

Taking on any short positions of late has been more than likely an unmerciful experience. I personally have avoided them like the plague, and as I mentioned yesterday, they will be relevant again at some point, and when that time comes you want to be ready with a list of setups you can take advantage of.

On the other hand, today's long Sears Holding (SHLD) comes as some surprise for some of you all because it has been one of the most hated stocks for years now. In fact I usually pass right over it, but @thetradingwife brought it to my attention and the set up is incredible. So if it can pullback to $62.20, I'll likely initiate a long position on it. Further to my earlier post today (Thursday), here's where the markets closed after
the Fed announced a new round of monetary
stimulus.

Equities, as represented by the YM, ES, NQ &
TF, spiked and made the highest close, so far, this
week and this year, on higher volumes. The YM and ES are at/near the top of
their rising channel, while the NQ and TF are trading above, as shown on the
Daily charts. 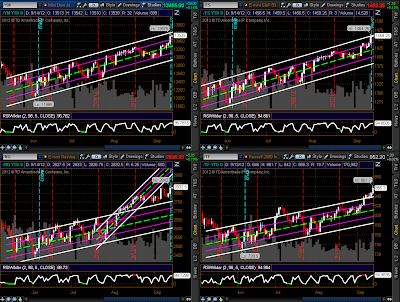