In my post of July 25th, I pointed out that Britain's
FTSE 100 Index was trading around a major price support/resistance
level of 5500. It subsequently bounced from there and has risen to the top of
the large "Diamond" pattern (which, I mentioned, has been
forming from 2009/10…and is, potentially, a topping pattern with a
1300 point range).

The updated Daily chart
below shows market action, to date (October 18th's close). Price is
facing immediate major headwind resistance from the upper edge of this
Diamond pattern, along with negatively-diverging RSI, MACD, and Stochastics
Indicators…one to watch for a potential breakdown, as the 1300 point range is
substantial. 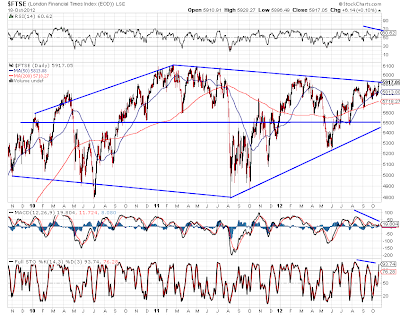 I'm mindful of the
fact that Britain is also facing a 9 billion pound debt
incurred from hosting the 2012 Olympic Games, as it struggles
with a double-dip recession, severe public spending
cuts, and an unemployment rate of 7.9% (as reported here on October 17th and shown on the graph
below)…adding, enormously, to the above headwinds.