Best wishes, America, in your recovery in the wake of Hurricane Sandy! My
thoughts and prayers are with you.

Markets have been
closed since Monday due to the hurricane. Below is an update of the YM,
ES, NQ & TF e-mini futures indices, with the last two days
(comprised of Globex-hours trading only) signalling a potential reversal. We'll
need further clarification during full market-hours trading when that resumes (scheduled for Wednesday).
All four are now below their channels from the June lows, and any bounce may
only be testing the bottom of the channel before resuming a downward
trek. 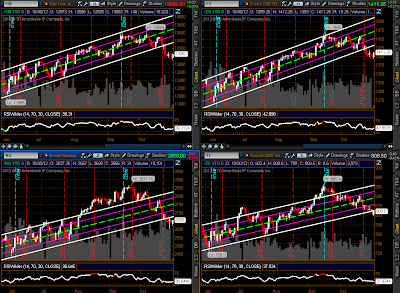 He we are the day after when the “Storm of Storms” has hit the
eastern seaboard of the U.S. with the devastation rivaling the asteroid
believed to have hit the Yucatan millions of years ago and wiped out the
largest lifeforms of the planet.

At least that’s the way Sandy has been portrayed across the media.
She’s causing distress and hardship yes, but as of this morning her
trail of destruction seems more inline that she’ll fall more into a
nuisance based aftermath rather than the death and destruction
equivalent of a Mayan apocalypse.

So here is where things begin to just not add up. When the tragedy of
September 11th, 2001 happened one of the first concerns regarding the
markets was to ensure in the event of any similar events; the markets
could operate, operate correctly, and efficiently.

END_OF_DOCUMENT_TOKEN_TO_BE_REPLACED

Well the US markets are closed for a second day today but the futures markets are still open in Globex hours. I wasn't certain that it would be worth doing a post today but blog traffic was only down about 25% yesterday so the majority of my readers are still trading or at least keeping an eye on the markets.

ES made an overnight low at 1393 at the support trendline I posted yesterday morning. There is now another potential double-bottom setup on ES with a target at 1432 resistance on a break over 1413. If there is no break up, then support is at the same trendline which should intersect strong support at 1388 ES in the next day or so. That's been happening more slowly than I expected yesterday as I hadn't taken into account that ES trading would be down as well during trading hours: