There's a lot of chatter on the airwaves about the billion dollars – – a record – – that's going to have been spent on the 2012 Presidential campaign (let me save you the suspense: Obama is going to win in an electoral landslide, thus meaning the billion dollars was a total waste, and the POTUS is going to ramp up his plans for his risk-free final term in office).

The actual money spent by Obama to secure his second term is more along the lines of nine trillion dollars, if the money-printing bonanza by the Fed is any guide. I hope he enjoys his second term and that it's worth every penny.

One thing we can all agree (except for the blind among us) is that the impact of all this easing is getting weaker………and weaker……….and weaker. Just look at the withering-away of the leaps tinted below. The frustrating thing, of course, is that with a permanent bid under the market, the "selloffs" (if you want to call them that) don't last any more than six days, tops. Just when it seems things are starting to rock 'n' roll, we flip back up again.

END_OF_DOCUMENT_TOKEN_TO_BE_REPLACED

In an effort to jinx the market, I'll talk about some bullish stuff in this post. Here are five long ideas I've shared over the past couple of weeks that seem to be coming along nicely. I've included volume for one of these, since I think it is a vital part of that particular chart.

Assets across the board are zooming higher (kind of like the past four years………), but the prospect for a dip by AAPL to $605 remains in view. They report earnings next Thursday, after the close, and so long as they don't cut through the neckline I've tinted below, this seems like a pretty decent risk/reward ratio.

I've been running a lot of charts this morning and have narrowed the field down to ten I'd like to post today. That's rather too many, so I'll post five here and the rest on twitter later.

On the SPX daily chart there was a clear break over resistance ant the middle bollinger band yesterday and that should be support on a closing basis today in the 1448 SPX area. The next target up is the upper bollinger band, currently at 1468, and that is the retest of the highs area that I was talking about yesterday. Barring a major reversal today that's what I'm expecting to see on Friday or Monday: 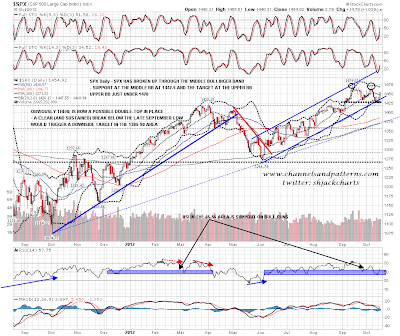