The level of expectation for equities this year across the financial world looks highly bullish. With a budget deal done and the Fed pumping newly printed money into the markets there can be no stopping the rise of equities and the decline of the dollar.
There is one obvious fundamental sticking point with this scenario in that as yet no budget deal has been done, and reaching such a deal doesn't look at all easy. There is a lot of speculation that will be finessed with the threat or actuality of using a poorly worded law to allow the printing of one or more trillion dollar platinum coins. That could happen in the looking glass world of US government debt but it may or may not prove to be legal to print a commemorative coin with such a high value.
The key though to this bull scenario should be the round of earnings reports and full year guidance that starts today. If these are impressively good then perhaps this bullish scenario for 2013 might deliver. If they disappoint then most likely not.
From a technical perspective the action on the RUT and TRAN particularly looks bullish, though in the case of TRAN that will look more bullish once we see a break over the 2011 high, but the most obvious large scale pattern setups on equity indices are still the bearish rising wedges that have broken down on Dow and SPX. These may yet fail to deliver, but they are impressive patterns that strongly suggest more downside after another big high in the next few weeks, and until we see strong evidence to the contrary, I'll be bearing these in mind.
Unlike the SPX equivalent the rising wedge on Dow is still testing broken wedge support. This is an obvious level to see short term retracement or possibly major failure, unlikely as that seems today given current sentiment: 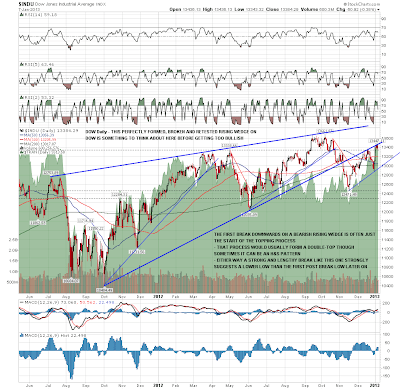 SPX closed back inside the daily upper bollinger band yesterday. If we are to see a retracement then it should now have started. Support is at the middle bollinger band, now at 1433: 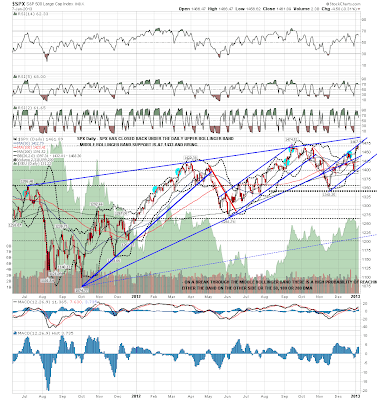 On the 60min chart the current rising channel on SPX is still looking good. The obvious downside target on a retracement would be channel support, currently in the 1407 area but rising fast. If we are to see a touch of channel support I'd expect the retracement to last a week or two, hitting support in the 1420-30 range. This channel is very important. Why? Because if the very bullish predictions from many analysts for the next few weeks are to play out, the first signal would be that this channel will break up. I'll be watching for that carefully. While the channel holds upside from here can only be incremental over the next few weeks. 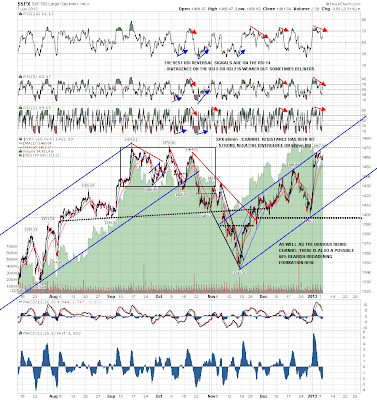 On ES I think we are at make or break for the current retracement. ES has established very firm support just over 1450, but we have seen the break below the 50 hour moving average that I was looking for yesterday morning. If this retracement is to continue then we shouldn't see a break back much above that, and so far it has been holding overnight. If ES can now break below 1450 then I have a double-top target in the 1438 area:

On other markets EURUSD is stalling at the 1.3127 level on negative RSI divergence that is suggesting reversal. Since I capped this chart EURUSD has been breaking down from there. Support is in the 1.30 area and main uptrend support from the 2012 low is in the 1.2965 area:

CL is close to making a higher high to reconfirm the current uptrend. I have some doubts about this as the current move has been very hesitant and there is now an obvious possible short term double-top on this chart with a target in the 89.1 area on a conviction break below 81.5. No negative RSI divergence here though:

I've been reading a lot of very bearish analyses of precious metals in recent days, but am not seeing that on the GC daily chart. Instead we have a marginal lower low on positive RSI divergence setting up a possible W bottom. GC needs a higher high to confirm but this is a provisionally bullish setup:

As many have pointed out, the sideways action that we have seen on SPX and ES over the last few days could be a bull flag. Possibly, and there are examples of bull flags forming at the daily upper bollinger band on SPX in February and September 2012. If we are to see a retracement of any substance it should have already started, and I'll be looking for the 50 HMA at 1456 ES to hold today and for a break below 1450 ES. If it goes the other way today the retracement scenario will look a lot less attractive.
https://slopeofhope.com/2013/01/earnin.html
Earnings Season Begins (by Springheel Jack)
SlopeTalk LIVE