Let me preface this by saying that my bear mojo has been almost completely drained from my veins at this point. The best positions I have are all long ones, and after 20+ months of hearing (and repeating) Why The Drop Is Going To Start Now, I'm getting close to just focusing on the long side. Call it capitulation if you like; I think I'm past caring.

Having said that, I humbly offer up this interesting comparison between the market top in 2008:

If we get a rally tomorrow (and the jobs report, I suppose, will decide that), the above is rendered moot.

I once again want to thank the gracious contributors to Slope – – – both those who create posts and those who comment. You guys and gals are the heart and soul of this community, and I am more grateful to you than I can express. This is a special place, and I thank you for making it so.

As I've mentioned in the comment threads here on occasion, I've essentially given up trying to predict market direction in the near term. My gut feeling is to lean toward the bearish side, but my gut hasn’t been that good at market timing. So I’ve started putting cash to work in market neutral trades every couple of weeks.

I’m borrowing a page here from a page here from Short Screen member Marc Mayor, who has run a market neutral portfolio with impressive returns for the last ten years: adding a paired long and short position every two weeks, and then eventually closing out old positions as I add new ones, to keep the portfolio capped at 52 positions (26 pairs). I may exit positions before I get up to that cap, but given the number of positions and the small relative size of each one, if I add stops they will be wide ones.

CCSC is Country Style Cooking Restaurant Chain Co., Ltd., an upstart fast food chain serving Chinese cuisine in China. CCSC went public in the the U.S. at the end of September at $16.50 per share (above its expected offering range of $14-$16) and spiked up 47% on its first day of trading. It peaked at close to $35 per share toward the end of October, and has plummeted since then.

Even after this steep drop, CCSC looks pricey, trading at about 6x trailing sales, 57x trailing earnings, and 39x analysts’ average earnings estimate of 2011 earnings (58 cents), with a PEG ratio of 2.09.

CCSC may see additional selling pressure when the lock-up period for insiders ends and they can start unloading shares.

YUM breaks out its operating results by three divisions — China, U.S., and International, which covers all of its markets excluding the U.S. and Mainland China. In its most recent quarter, 46% of YUM’s operating profits came from its China division. Operating profits also grew the fastest in its China division, on a year-over-year basis: 24% versus 18% in YUM’s international (ex-China) division, and -2% in its U.S. division.

Of the 3,664 restaurants YUM had in China at the end of its Q3, 3,054 were KFCs and 575 were Pizza Huts. The handful of others were a new concept YUM is testing in China, “East Dawning”, which sounds like it would represent direct competition for CCSC’s restaurants. From YUM’s website:

East Dawning, the company’s Chinese quick-service restaurant brand to provide affordable, great-tasting, authentic Chinese food to the Chinese customer. The East Dawning menu is 100% Chinese and offers a wide range of options for all day parts including breakfast, lunch, dinner and snacks.

YUM isn’t exactly cheap here, but trades at a more reasonable valuation relative to its estimated growth and earnings, with a PEG Ratio of 1.63.

Sorry to be so out of pocket lately. The psychological toll of dealing with days like yesterday is hard on me.

A bright spot for me today is miners (GDX), which I'm long. This continues to be a gorgeous chart.

I have been watching the grain markets with great interest since 2008 when we entered into this cyclical cooling period.  As the earth cools it has a great impact on three major grain markets.  Canada, Russia, and Australia.  Russia has suffered a devastating collapse in their wheat harvests due to drought, Australia has gone from extreme drought to excessive rains and disease, and Canada's growing season has compressed due to early winter onset.

Two other macro issues are also in play, grains like all other hard assets are being bought to preserve wealth in the fiat folly policy underway around the world, and increasing middle class members around the world is raising consumption of said grains.  As a result, grain inventory around the world has slipped to 90 days, a 11% decrease over the past year.

So in my view a perfect storm is coming for the grains.

Looking at the chart of JJG, it is ready to reengage its upward channel.  When it broke below the channel the 20 never broke below the 50.  I am a buyer (scale in) as it slips back into that channel.

Personally, we have been stockpiling flour and sugar to give us a cushion, if need be (remember the rice shortage). 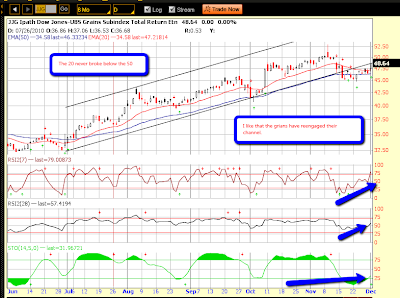