People ask me all the time if the U.S. is in such bad shape and things get worse, why will the dollar and gold do well.  I then whip out this chart and explain to them that as things get bad people need to sell things that are electronically invented and / or are leveraged and buy something that has less debt or leverage associated with it, or in the case of gold no debt associated with it.

To illustrate how much debt worldwide is out there against real capital, look at the following chart.

The annotations are mine from government websites.  There is approximately $5 trillion in cash and gold supporting $290 Trillion in assets.  That is some nasty leverage.  The world governments are trying to add $2 trillion in capital to the foundation.  This is grossly inadequate.  The world's asset base simply declines by 3% and we are insolvent again.

As anyone who owns a business or truly invests in capital assets, you value these assets on the discounted income they generate, and as government spending takes over private spending to increase this capital base, it is inefficient and slows velocity that can generate income, and increasing taxation does the same.  So bottom line, the income supporting these assets are suspect and after a next flirt with high inflation we collapse into a debt destruction spiral.  Happy New Year.

I would have otherwise had a good day, were it not for one position – a large long on TLT (the ETF on Treasury bonds). I had been watching @ZBH1 all night, and earlier it was up nicely, but it started slipping. What puzzled me was that, a little before the open, the futures were down about 1/10th of a percent, whereas TLT was down over half a percent (and that was just the beginning).

I got out of TLT at a loss early on, and a good thing too, because the thing basically collapsed all day long.

But that leads me to the question which is the subject of this post: don't interest rates matter to the market anymore?

Here are the cold, simple facts:

(a) Bernanke has made it abundantly clear there is no limit to how many hundreds of billions he will throw at the market to keep interest rates down. Conclusion: since this pledge is made by the most powerful financial force on the planet, rates should get low and stay low.

(b) Interest rates had done almost nothing but climb for the past three months, as shown in the graph below. Conclusion: the market's concerns about inflation outweigh the most powerful financial force on the planet, and QE2 is and will continue to be a failure.

(c) The housing industry, ostentisibly one of the principal beneficiaries of QE2, is heavily dependent on low interest rates (I'm pleased to report I refinanced my house at 3.25% fixed this autumn – – just about the only positive financial event in my life this year). Conclusion: With rates soaring higher, the housing market is going to continue to get damaged.

(d) The stock market, which for eons has shown its reliance on interest rates (dropping rates=good for equities; rising rates=bad for equities), simply keeps puking to new recovery highs every single day (check out the $INDU today), in spite of the above facts. Conclusion: the entire stock market can be replaced by one financial instrument whose ticker symbol will be WTF.

I was wondering whether we would see some correction this week, but I'm not really seeing anything suggesting that might happen. On ES and NQ we are continuing to chop sideways to up. ES broke short term support and is now crawling up the broken trendline: 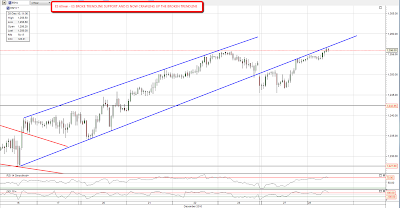 There is no good news for bears from USD either. EURUSD has made a rounded bottom and broken up from the declining channel from the early November top. I'm expecting more upside: 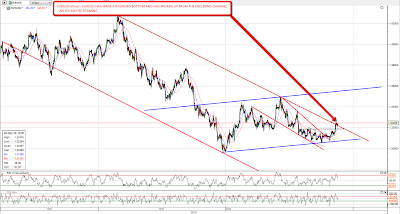 One thing we have been missing since the beginning of the equities spike up in December is any sort of pattern to suggest when we might see a top. We do have patterns, but they're larger and longer term, and we haven't reached the upside targets yet. I've posted the rising wedge on IWM a few times and here's the RUT version of that: 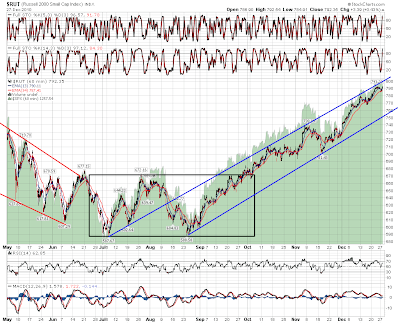 There's also a rising wedge on SPX and the upside target is in the 1285 area. You can see it here on the SPX daily chart. 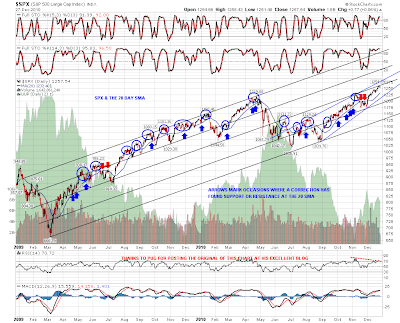 Will we make those upside targets? Hard to say but it looks very possible. One thing I'm watching carefully for directional clues is silver, which is still in the triangle I first posted two weeks ago: 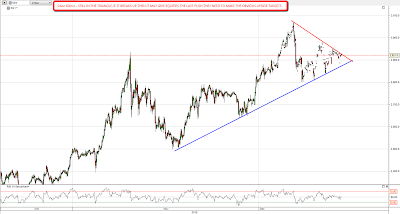 Bonds look a better play than equities here and TLT is still heading towards the upside target on the falling wedge. That's currently in the 95.5 area: 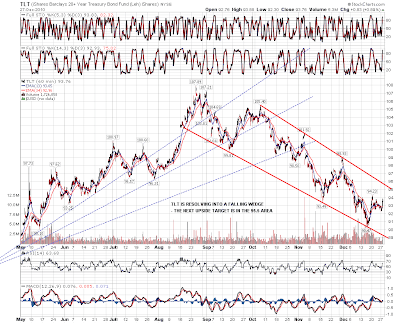 I'm only going to be posting intermittently until Wednesday 5th January though I'm expecting to do posts on Friday and probably Saturday this week.