I suppose it will come as a surprise to no one that this was one of my favorite songs as a kid (and lifelong Python fan). Good night.

I was pleased to see one of my short positions, Community Health, losing value after hours after it announced its acquisition of Tenet Healthcare, owner of one of the funniest ticker symbols around – THC. I find it rather amusing a health firm would actually use that as their symbol (unless they are in the medical marijuana business).

On a different note, I see there was a lot of excitement about Pimco raising their estimates for the U.S. economy due to "massive stimulus" (they are referring to the government giveaways that Obama recently wimped out about). It's good to know that a completely impartial party like a firm running the world's biggest bond fund is considered the oracle as to what the economy is going to be doing. It's not like they have a stake in it, is there?

The Ag Chems, in my opinion are looking tired, and any additional dollar strength will push them lower.  I intend to place a debit calendar put spread on POT, and add to or release my hedged leg upon a break of the black line drawn on my chart.  AGU looks similarly patterned. 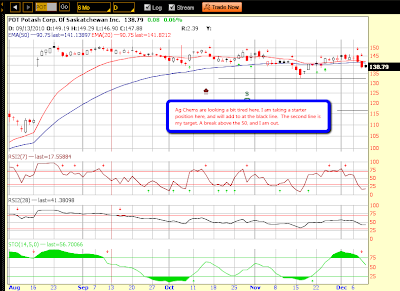 I noticed something kind of interesting this morning about the ultra-bull ETF for the Russell 2000. Take note of the horizontal line I've drawn, along with the touch-points. Before the crash (Tim's eyes grow misty and wistful..…..) UWM kept hitting this line, until it finally broke through gloriously on October 2, 2008.

Since the bottom, it climbed 300%, peaking on April 26, 2010 before slipping in a sustained downturn (remember those?). It has since clawed its way back up to this same line.

It seems accepted as gospel that stocks will never go down for more than one day again in our lifetimes, but I think this chart is worth noting.