As proof of a munificent God, I offer the fact that none other than Ron Paul – the libertarian Texas congressman whose last book is dedicated to why the Federal Reserve should be abolished – is going to be in charge of Congressional oversight of…………the Fed.

Here, from a New York Times article, are some earnest expressions of Paul's love for this esteemed institution:

The Beginning of the End

“The day the Fed came into being in 1913 may have been the beginning of the end, but the powers it obtained and the mischief it caused took a long time to become a serious issue and a concern for average Americans.”

“Whenever I talk of a gold standard, there are always people ready to accuse me of having some obsession or fixation. Fetish is a word thrown around. In fact, I’m only observing reality: the idea of sound money in most of human history has been bound up with gold money.”

New Money Out of Thin Air

“Only the Federal Reserve can inflate the currency, creating new money and credit out of thin air, in secrecy, without oversight or supervision. Inflation facilitates deficits, needless wars and excessive welfare spending.”

Fed Chairmen He Has Known

“Being in Congress in the late 1970s and early 1980s and serving on the House Banking Committee, I met and got to question several Federal Reserve chairmen: Arthur Burns, G. William Miller and Paul Volcker. Of the three, I had the most interaction with Volcker. He was more personable and smarter than the others, including the more recent board chairmen Alan Greenspan and Ben Bernanke.”

“Artificially low interest rates are achieved by inflating the money supply, and they penalize the thrifty and cheat those who save. They promote consumption and borrowing over savings and investing. Manipulating interest rates is an immoral act. It’s economically destructive.”

“Today, there is no principled opposition to the corporate bailouts and the Fed’s trillions of dollars of new credit and the takeover of insurance, mortgages, medical care, banks and the auto industry. The arguments have only been over amounts, financial vehicles, and which political group gets to wield the economic power. If there is no moral argument against the economic takeover of America, there will be no resistance to the dictator who rules over our lives with an iron fist.”

“For the same reason a disease cannot be cured by more of the germ that caused it, the inflation and debt accumulation of the Obama years will not inflate our way out of it. This depression will likely last and last.”

I use three computers and seven monitors in my trading (am I hung up on odd numbers? You better believe it; add that to the dazzling menagerie of Tim Quirks).

Two of the monitors tell me more about how my trading is going than any other – – one of them, obviously, is my positions spreadsheet, which tells me if I'm making or losing money. The other, surprisingly, isn't my giant /ES screen – it's my GDX screen. For whatever reason, the GDX is a far better barometer of my trading than anything else, even if I don't even have a GDX position. If you hid my spreadsheet from me, I could probably do a better job telling you its bottom line by looking at GDX than by looking at the /ES.

Over the past six trading sessions, I have ended the day profitably five times. The exception was Friday the 10th, mostly because I had one of my positions totally blow up on me (a short on BEC). Now here's the crazy part – – even though I was positioned mostly bearish that entire time, the market was up for 5 out of those 6 days!

To repeat – – I was bearishly positioned; the market moved up almost the entire time; and yet I was profitable each of those days except for Friday.

This tells me a couple of things; first, my bearish picks are pretty good, since they're able to survive this ongoing, sickening nonsense; and second, underneath the shiny surface of a market constantly reaching new highs, there is rot appearing beneath. (Such as whipping-boy Chipotle Mexican Grill, which dropped over 5% today, and which I am happily short).

There's more to it than this, though. Some of the staunchest bulls – who have had a terrific 2010! – have been writing me privately to tell me they think the market is about to turn downward. They are not jumping-up-and-down bears, but they are definitely saying that a meaningful drop is in the cards.

In addition, in my real life, some of the most naive, ignorant, and flat-out dumb-about-markets people that I know are just giddy over stocks right now. The NFLX of 2010 is the YHOO of 1999. Making money in the market is easy………just buy, buy, buy!

This market is still utterly treacherous for the bears. In the grand scheme of things, I consider Ben Bernanke to be the head of the biggest Ponzi scheme in human history, and as such, a traitor and criminal. These days, of course, he's a hero to most people. I disrespectfully disagree.

I personally would get seriously excited about going long stocks in a big way if the $SPX got back down to around 1150-1175. Until then, I am probably going to remain mostly short.

I'm a visual person. I always have been.

For this reason, the artistic creations from great chartists always grab my attention. One gentleman in particular emails me on a semi-regular basis, and he sent me some ellipse-based charts during the weekend I really enjoyed. The symmetry here is simple and elegant:

I've been very out-of-pocket today since I was busy entering new positions. I've got a hectic afternoon, but I should have time for a post today. It was a pretty good day for me, and I hope it was for you as well.

I don't know whether this is the top but I think it might well be. I'm not expecting to see any serious falls before January in any case but I think this might well be as high as SPX and Nasdaq go. After not seeing much in the way of channels or patterns on the latest spike up we finally have some very nice rising wedges or ending diagonals from the last low. These are generally a fifth wave formation so for these to appear at a point where we're looking for the final move up is significant. Here it is on ES: 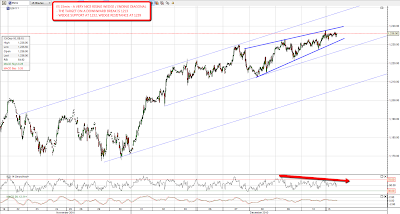 Here it is on Nasdaq: 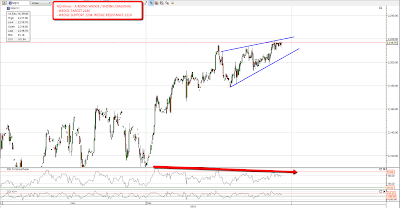 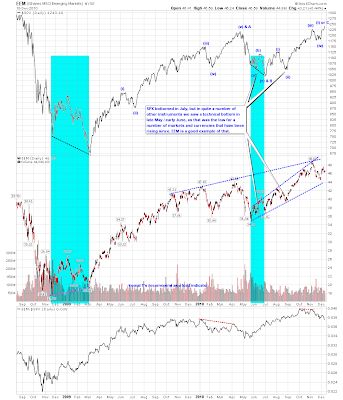 SPX:Vix has been in a rising channel since June and has made a high in the right area: 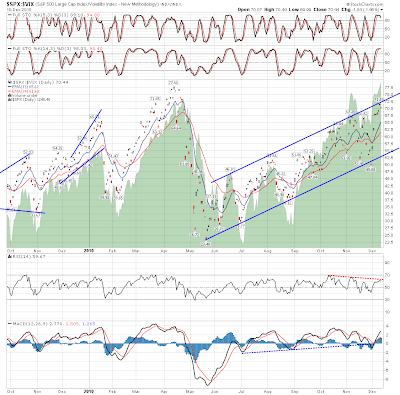 Most importantly of all USD has been consolidating and looks ready for another move up. A rising channel has formed on the daily chart that looks solid: Pug's calling a likely wave 1 top here, and I'm joining him. We might see a marginal new high within the rising wedges today but what I'm expecting now is that we see a first wave down this week, see a second wave retracement back up over the Xmas period, and start the third wave of A in early January.